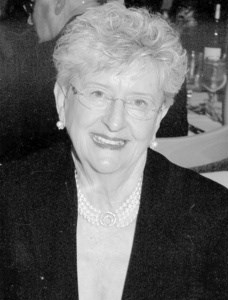 Betsyana (Betsy) Patterson Conlee passed away on the morning of September 15, 2021. To celebrate a life well-lived, the family will hold a memorial celebration on Sunday, September 19, at Wilkirson-Hatch-Bailey Funeral Home, at 6101 Bosque Blvd, Waco, Texas. Visitation will begin at 3 p.m. with the memorial service following at 4. The memorial service will be livestreamed: on the day of the service, a link will be available on Betsyana's obituary page at www.WHBfamily.com

Betsy was born in Bryan, on February 16, 1928, to R. Pat and Rose Miller Patterson. She graduated from Stephen F. Austin High School in 1945 and attended Texas State College for Women (Texas Women's University) in Denton. After college she worked for the Director of Athletics at Texas A&M University until her marriage in 1949 to Douglas M. Conlee, of Bryan. Betsy and Doug were married for 52 years until Doug's death in December 2001. Three daughters were born to the marriage – Cynthia Conlee Marable, Nan Conlee Felton and Kim Conlee Hatchett. Betsy's daughter Nan preceded her in death in April 2012, as did Betsy's parents, one sister, and two brothers.

In 1958, Betsy and Doug Conlee moved their family to Waco, where Doug was the President of Conlee Seed Company, a wholesale seed company with Texas locations in Waco and Plainview, as well as a location in Guadalajara, Mexico. Betsy was a member of First Methodist Church in Waco.

Betsy, Grandma Betsy, GG was the matriarch of the Conlee family and the ultimate hostess. Her favorite thing was having friends and family for meals and holidays in her home of 54 years on Royal Oaks.

Thank you to Dr Wayne Falcone, Dr Adam Falcone, Nurse Missy, and Dr Gary Barbin for years of amazing care. She was blessed by so many, but Betsy truly wanted to thank Barbara Harris for her "invaluable friendship and unwavering loyalty" and for being such a huge part of her life for the last 54 years.

In lieu of flowers, the family suggests that memorials can be made to the First Methodist Church of Waco or Community Cancer Association, P.O. Box 5002, Waco, TX 76708.

The family invites you to share a message or memory on our "Tribute Wall" at www.WHBfamily.com.