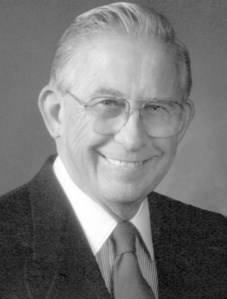 Billy H. Davis, Sr., 98, peacefully, and with his family by his side, was called home to his Lord on September 12, 2021. A graveside service will be held at 10 a.m., September 16, at Oakwood Cemetery, with Reverend Byron Weathersbee officiating.

Billy was born on September 27, 1922, in Thayer, West Virginia, to parents Ernest and Elsie Davis. After high school, he joined the Army and was stationed at Fort Hood, Texas. At a USO dance in Gatesville, Texas, in 1943, he met the love of his life, Bonnie Alexander. After a short courtship, they were married on July 18, 1944, just prior to his deployment to the Phillipines in World War II. Following the war, Billy and Bonnie returned to Waco, where he began his 33 year career with Sherwin Williams Paint Co. At the time of his retirement, Billy was Vice President of Sherwin Williams. Following his retirement, Billy and Bonnie returned to Waco, where he became involved in various civic activities. He was a member of the Waco City Council and was mayor in 1982. Billy served many years on the Board of Directors of Hillcrest Baptist Medical Center and was an active member and deacon of Columbus Avenue Baptist Church. He was also a real estate developer for many years in Waco.

Billy and Bonnie were married for 74 wonderful and joyous years. As a young adult, Billy accepted Jesus Christ as his Lord and Savior, and he lived and demonstrated his faith his entire life. Billy's hobbies included family time, travel, hunting, especially for turkey, golf, and his monthly Texas Hold'em Poker with his special poker friends. Billy enjoyed people. He was caring, loving and the eternal optimist. He was proud to be a part of "The Greatest Generation."

The family wants to express great gratitude to The Brazos and caregivers Connie, Irene, Estella and Triena.

Memorials may be made to Columbus Avenue Baptist Church or Mission Waco.

The family invites you to share a message or memory on our "Tribute Wall" at www.WHBfamily.com.

Published by Waco Tribune-Herald from Sep. 15 to Sep. 16, 2021.
To plant trees in memory, please visit our Sympathy Store.
MEMORIAL EVENTS
Sep
16
Graveside service
10:00a.m.
Oakwood Cemetery
TX
Funeral services provided by:
Wilkirson-Hatch-Bailey Funeral Home
MAKE A DONATION
MEMORIES & CONDOLENCES
Sponsored by Wilkirson-Hatch-Bailey Funeral Home.
2 Entries
We are so sorry for your loss. He made many wonderful contributions to the church and community for which he will be remembered. May you find comfort in the legacy he left. Ann and Duane Lindsey
Ann Lindsey
Friend
September 15, 2021
Billy Jr.,Debbie, Brad and family, I send my condolences and also my admiration for Billy Davis. He was a fine man, and I was proud to be a member (married-Dick Johnson) of the family. He was a pillar to the family--and meant to much to all. Billy and Bonnie were a model for all.
Peggy Johnson Thomson
September 15, 2021
Showing 1 - 2 of 2 results