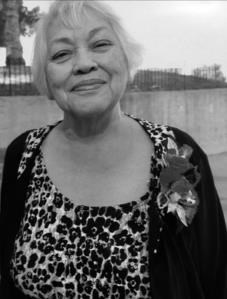 Dolores "Lola" Silva Lopez ran from her Earthly body into the arms of Jesus on Nov. 15, 2020. The Holy Rosary will take place at 7 p.m., Thurs., at Connally Compton Funeral home, and the Holy Mass will take place at 10 a.m., Fri., at St. Francis on the Brazos Catholic Church. Burial will follow at Santa Cruz Cemetery in Hallsburg.

She was 79 years old physically but was mentally forever young. Lola was born on July 13, 1941, on the family farm in Elk, Texas. She was the youngest of ten siblings born to Jose and Felicitas Silva and was accused of being the most spoiled. She would be the first to admit those accusations were true! Her heart was on the family farm land and she was able to live there until six months before her death. It was where she had her happiest, saddest, funniest, and most loving moments.

Lola and Francisco Lopez have been married for 49 years. In the good times and the bad, they always loved and looked out for each other. They are parents to one daughter, Sonia Lopez Phillips. She was her daughter's biggest cheerleader and it never occurred to Lola that there was anything her daughter couldn't do. They were the best of friends and would talk on the phone at least twice a day before Lola moved in with her family in September.

As much as Lola loved being a mother to Sonia, there was nothing that could come close to her love of being a grandmother. To Lola, her grandson Landon was the apple of her eye and the moon and the stars in the sky. When he was at St. Francis Kindergarten, she came out of retirement from working for the state to go and work there to be able to spend more time with him. They would spend hours talking about life, movies, school, video games, and whatever else came up during their regular chats. They also regularly attended Bingo together where she shared her love of gambling with him. Lola cherished their time together and Landon had the best grandma for 23 years.

Before she passed, Lola told her daughter that she "loves, I mean LOVES being a Catholic". She spent as much time working for St. Francis Catholic Church as she did at home. It was her relationship with Jesus and the Virgin Mary that gives her family comfort knowing that she is celebrating up in Heaven and telling us all to dry our tears. She always spoke of how much she missed her Mamita and Apa and all her siblings. We can only imagine the beautiful family reunion they are having.

The entire family would like to give a special thank you to her son-in-law, Kacy Phillips. Kacy took a leave from work from September until her death to stay home and take care of her. They spent countless hours together talking, watching the Price is Right and Gunsmoke, and going to her numerous appointments. He took an active role in her health care and earned the title of "Dr. Phillips". When he told Lola it was time to take her meds she would always say "Uh oh. The doctor has spoken". We are eternally grateful to you for making her last days the best they could be.

We love you, mama. You are forever in our hearts.
To plant trees in memory, please visit our Sympathy Store.
Published by Waco Tribune-Herald on Nov. 19, 2020.
MEMORIAL EVENTS
Nov
19
Rosary
7:00p.m.
Connally-Compton Funeral Directors
4400 West Waco Drive, Waco, TX 76710
Nov
20
Funeral Mass
10:00a.m.
St. Francis on the Brazos Catholic Church
Nov
20
Burial
Santa Cruz Cemetery
, Hallsburg, Texas
Funeral services provided by:
Connally-Compton Funeral Directors
GUEST BOOK
3 Entries
My sincere condolences to the family, May she Rest in Peace in God's loving arms.
Rita Arroyo Larios
Acquaintance
November 21, 2020
Our condolences for the family. Praying for the family
Virginia Barbosa
November 20, 2020
Sonja & Kacy, I am so sorry for your loss, my thoughts and prayer for you and your family. Kacy I am so proud of the role you took to help Sonja and her mother you are amazing. May God Bless you and guide you through this most difficult time. Sandy Reddig
Sandra Reddig
November 19, 2020