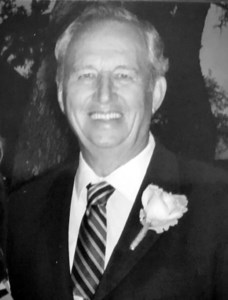 Roger Jones, a longtime Hewitt resident and Waco businessman, died November 20, 2020, at the age of 84 following a long struggle with Parkinson's. An informal visitation will be held from Noon to 4 p.m., Sunday, November 22, at Grace Gardens in Waco. A graveside service for family will be held on Monday, November 23, at Waco Memorial Park in Waco, Texas, with Rev. Roy Marshall presiding.

He was born November 2, 1936 in Snyder, Texas, to Fred and Netha Lynn Rogers Jones. He lived his teenage years on a farm at South Bosque, Texas, and attended Midway schools, graduating in 1955. He was a member of the undefeated 1954 Midway football team under MT Rice, Midway's first coach. In May 2006, he was inducted into the Midway Athletic Hall of Fame. He also acquired his Lone Star Farmer award, the highest award offered in FFA.

He married his classmate Barbara Rutledge in January 1957, and celebrated 63 years of marriage. He started a six year apprenticeship as a printer at the Waco News Tribune while in high school and worked at the Dallas Morning News until 1961. In August 1961, he started Jones Printing Co., which after 59 years is still in business. In 1962, he purchased Pitillo Printing Co. and the Waco Farm and Labor Journal, the start of his weekly newspaper publications. In 1985, he bought the Riesel Rustler and started Hometown News, which was sold in April 2015.

Roger was a respected civic leader in the area. He served as a coach, umpire and team sponsor for local sports teams and served as president of the Midway Booster Club for three years. In 1988, he was named Hewitt Hero by the Hewitt Chamber of Commerce. He was a member of First Baptist Woodway and attended until his health failed.

He is survived by his wife, Barbara; four sons, Terry of Waco, Robbie (Rhonda) of Hewitt, Randy (Melanie)of Austin, Donnie (Susan) of Plano; and twin daughters, Debra Jones Tumlin of Hewitt and Kathryn Jones Meyer (James) of College Station; nine grandchildren, Lauren (TJ) Vassilico, Morgan (Stephen) Warren of Austin, Tracey and Kristen of Hewitt, Nicholas (Brittney) of Rexburg, ID, Alexandra of Plano, Josey and Kasidy Meyer of College Station and Wylie Tumlin of Hewitt; and four great-grandchildren, Asher and Avery Lowe and Dean and RJ Vassilico, all of Austin. Also surviving are his siblings, Larry of Many, LA, Alta Lynn Jones Hopkins of Dickinson and Pattye Kay Jones Denison of Beaumont; and an aunt (like a sister), Jane Rogers Evans of Granbury; in-laws, Donald Rutledge of Budd Lake, NJ, Harold Rutledge of Hewitt and Glenda Rutledge Wright of Arlington.

Memorials may be made to First Woodway's Food Pantry (Given in Jesus Name), Parkinson's Foundation at www.parkinson.org or the charity of your choice.

To plant trees in memory, please visit our Sympathy Store.
Published by Waco Tribune-Herald on Nov. 22, 2020.
MEMORIAL EVENTS
Nov
22
Viewing
12:00p.m. - 4:00p.m.
Grace Gardens Parlor
8220 Woodway Dr, Waco, Texas 76712
Funeral services provided by:
Grace Gardens Funeral Home
GUEST BOOK
9 Entries
To Terry and the rest of the family, I extend my sympathy, thoughts and prayers in memory of a great man and a good friend I'll always remember fondly. Would love to talk to you sometime, Terry.
Larry Breen
December 1, 2020
Robbie and family, I was very sorry to hear of your loss.
William Hurst
November 30, 2020
Terry, Debra and family... I am so sorry to hear about your dad's passing. May God's love bring you all peace and comfort during this sad time. You're in my thoughts and prayers! Love, Pam
Pam Bethke Cooper
November 23, 2020
So sorry about Roger. He lived a good life and Heaven will be forever.
Billy Joe & Betty Smith
November 22, 2020
Barbara & Family, You and Roger always will be a part of mine & my parents lives. I will cherish those memories. When I heard you were having twins, I was praying real hard that they would be girls & the GOOD LORD ANSWERED MY PRAYER. MY MOM HAD THE HONOR OF KEEPING THEM ALONG WITH RANDY & DONNIE. ALL FOUR BROUGHT TONS OF JOY & LAUGHTER INTO MY PARENTS LIVES. MINE AS WELL TOO. MAY GOD SURROUND YOU DURING THESE DAYS AND I LOVE YOU SO VERY MUCH ALL THE WAY FROM GRAPEVINE!!
Steve & Terry Rosentreter
November 22, 2020
Dear Barbara & Family, It was with sadness that I read this morning that our Class of '55 is 1 less. I wanted to come to the visitation today but this still small voice keeps telling me "no"; I don't need to risk exposure with all of these spare parts installed. I have many fond memories of Roger, having played f'ball with him 2 years. The 1 thing that amazed me about him was his work ethic, seems he was always working. But he was one of the few with a "new" car! LOL My most sincere condolences, HH
Hayden Harris (Giz) Moody
November 22, 2020
Blessings, peace and comfort to all of you. The whole Jones family have been special to me for many years!
Twila Tapp
November 22, 2020
Such a special man and friend. Enjoyed all of the times we were able to visit with him at baseball and basketball games. I loved his laugh and if ask how he was doing he would say ok even though we knew better. We were so blessed to know Roger and the rest of the family. Our loss but Heaven's gain. May God watch over your family. We love you all.
Eddie and Kay Robertson
November 22, 2020
My sincere thoughts to the Jones Family. Your dad was the sweetest. Always enjoyed our visits at the print shop.
Cathy Hall Wood
November 21, 2020