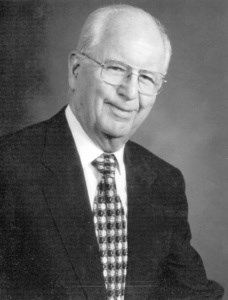 Rowland D. (Pat) Pattillo, Jr., was born in Fordyce, Arkansas on February 19, 1923, and, for the most part of his working life, he practiced public accounting in Waco, Texas. He married Nell Cown (who died in 2010) in 1946 and Lula Mae Denison in 2011. He died on November 29, 2020, and is survived by his wife, his two sons, five grandchildren and spouses, and nine great-grandchildren.

Those who loved and/or knew him are aware of his many failures and shortcomings, and his limited successes and awards. For those who did not, it doesn't matter.

Our father, grandfather and great-grandfather's spirit passed from this world to the next on November 29, 2020, from COVID-19. He was 97 years young. At the age of 9, Pat's father died while working for the federal jobs program in Arkansas following the Great Depression. Shortly after the death of his father, he and his mother and brother, John, moved from their farm near Fordyce, Arkansas to Arkadelphia, Arkansas so that the family could be near his mother's family for support. At age 11 or 12 he went to work as a sacker at the local grocery store in order to help support the family. He continued to work while in school in various jobs in Arkadelphia until he entered college. He remembered his years in Arkadelphia fondly surrounded by extended family and many friends.

He graduated from the University of Texas at Austin in 1945 with a BBA in accounting. Following his graduation, he worked in public accounting in Houston for a year. While at The University, Pat met Nell Cown from Clarkston, Georgia, and they were married in 1946. Shortly after being married, Pat and Nell moved to Waco where he practiced accounting with Frank Wilcox. Following Mr. Wilcox's death, the firm evolved through the years to be Pattillo, Brown and Hill which remains to this day a vibrant and successful accounting and consulting firm in Waco with offices in several cities around the state. Following his retirement from Pattillo, Brown and Hill, Pat worked for 10 years as a stockbroker for A.G. Edwards in partnership with his son Denny.

Pat loved being a CPA. He served his profession in many capacities including as President of the Texas Society of CPAs, as a board member of the Texas State Board of Public Accountancy, and as a member of the Ethics and Professional Disciplinary Committee of the American Society of CPAs. Pat loved Waco. As a citizen of Waco, he served his church and many charitable organizations, and was for many years a member of the Board of the Cooper Foundation. He was elected mayor of Waco in 1988. He was a member of The First Presbyterian Church from 1946 until his death.

Pat was a man of many dimensions. He was a man of conviction and principle, a good man, honest and hardworking. He was a philosopher, and a student of life. He was smart, inquisitive, well read, always learning. In his 80s he enrolled in an Algebra II class at MCC because he felt like his mastery of the subject wasn't what it used to be. He read every day subscribing to all sorts of magazines and periodicals. He read mostly of current events, issues of the day. He thought TV was a waste of time. He loved people, and he always wanted to "hear their stories." He never met a stranger. He always had a smile on his face and got up every morning choosing to be happy.

He loved a group of men he called "the geezer's group" which met each Monday morning for several years to discuss the topics of the day. He loved to play pitch each week with a group of dear friends. He journaled every day about his friends and the people he met oftentimes taking their pictures with his iPhone to include in his journal. He loved his iPhone, and was amazed at all his iPhone could do. He often started a conversation with "I met the most interesting person today" or "I had the most interesting experience today" or "I just had the best meal I've ever had".

He loved bridge, gin rummy, and in later years he really loved his sudoku. He played golf into his 80s. He always walked when he played golf instead of riding in a golf cart. After Nell died, he lived at Stilwell Retirement Residence in Waco from 2010 until 2020. He loved Stilwell, and everyone who lived and worked there. In May of 2020, not being able to live independently any longer due to a serious fall in February of 2020, he lived at The Delaney until his death. He enjoyed the community at The Delaney, its residents and the staff. He appreciated their caring for him.

Pat loved his family. He was so proud of his sons and their wives, of each grandchild and their spouses, and of each great-grandchild. He loved each of them dearly. His walls at Stilwell Retirement Residence were covered with pictures of family members engaged in the activities of their lives. Each family member was special to Pat. He bragged about us all to anyone who would listen.

To know more about Pat, read Rudyard Kipling's poem, "If". It had special meaning to Pat, and his life reflects the words of the poem in so many ways.

Because of COVID-19, there will be no public visitation, funeral service, or burial. Memorials can be made to the First Presbyterian Church Memorial Fund, The Cooper Foundation, Meals on Wheels, Stilwell Retirement Residence, Compassion Ministries, or to the charity of your choice.

The family invites you to leave a message or memory in our "Tribute Wall" at www.WHBfamily.com.

To plant trees in memory, please visit our Sympathy Store.
Published by Waco Tribune-Herald from Dec. 1 to Dec. 4, 2020.
MEMORIAL EVENTS
No memorial events are currently scheduled.
To offer your sympathy during this difficult time, you can now have memorial trees planted in a National Forest in memory of your loved one.
Funeral services provided by:
Wilkirson-Hatch-Bailey Funeral Home
GUEST BOOK
16 Entries
I´ve known Mr. Pattillo since I was a kid. He was always so kind to my sister and I. He used to make us cheese toast and tried to teach us how to play sudoku. He was incredibly supportive of our dreams as we tried to figure out what career paths we wanted to take as we got older. I´ve always considered him and Nell my adopted grandparents. My condolences to his family.
Adriana Gonzalez
December 5, 2020
I want to offer my deepest sympathies to the Pattillo family in the passing of Pat Pattillo. He was such a delightful and charming man. I always enjoyed visiting with him at Stilwell when Waco Retired Teachers would Meet there and entertain the residents. I was also privileged to know Spike and Sherry and to teach the Pattillo grandchildren at Waco High. A truly fine family! Pat will be greatly missed.
Lynn Allen
December 5, 2020
I am sincerely sorry for your loss. I meet Pat several years ago and enjoyed playing the game of 3-13 with him and his extended family. Pat will trully be missed.
Louis Sehon
December 4, 2020
Spike and Denny and your families, I was saddened to read of the passing of Pat. Every who knew your father respected him, admired him and liked him - he was truly an iconic man in our community I know you will miss him greatly.
Randy Merrill
December 4, 2020
Condolences to the family - Mr. Patillo was a role model and mentor. RIP
RoseMary (Mayes) Rafuse
December 3, 2020
Pat and I've both known for 15 years and more a semi-invalid Meals on Wheels recipient, Mauricio, who lives in a rundown south Waco neighborhood. Pat would see him on Thursdays and I'd see him on Tuesdays as we delivered for First Presbyterian. Mauricio often talked to me about Pat, not knowing, best I could tell, that this man was a significant community leader, Waco's first elected mayor of the modern era. Pat would lend him 10 or 20 bucks, call out of the blue to check on him and, as I recall, take him grocery shopping. Pat would call even when he was no longer physically able to drive the Meals route. This Tuesday morning I told Mauricio about Pat's passing, that he'd been pretty sick recently. Mauricio said that explained why he'd not heard from Pat lately.
Bob Lott
December 1, 2020
After working for Pat during the 1970s and 1980s, it was a pleasure to renew our friendship at the bridge club several years ago. I have good memories of his bright smile, his friendly demeanor, his stories, and his good humor.
Gerald Nelson
December 1, 2020
Please forgive my misspelling of your name Mr. "Pattillo". I certainly know better.
Judy Lanier
December 1, 2020
I became acquainted with Mr. Patillow's son, Spike, back during my employment with Central National Bank. Spike, I am very sorry for your loss. You are blessed to have your father with you for so long. From the description of your father, I can see him in the smile I remember seeing on your face when you would walk into the bank. Peace and Blessings, Judy
Judy Lanier
December 1, 2020
Our most sincere condolences. He was a great man and will be missed and remembered.
Chet & Carolyn
December 1, 2020
I knew Pat mostly from church, but also outside church. It was my custom on meeting Pat to tease him saying "hi cutie" or " hi handsome". He would blush coyly and smile. I once rode with him to a Presbytery meeting in Dallas many years ago. His driving scared the be-Jesus out of me, I had to close my eyes. While Nell was still alive, my hubby and I ( Bob Lott) had them over one Sunday for collards and cornbread, both families loving southern cooking. There won´t be another Pat, ever.
Jackie Lott
December 1, 2020
Played bridge with Pat and Lula Mae. Pat was always so kind, such a gentleman. Sympathy to all who new and loved him. He will be missed.
Beverly Ramsey
December 1, 2020
To know Pat was to love Pat. He always had a smile on his face and love in his heart. The world has was a better place with him in it and now heaven is enjoying him and all his wisdom.
Joanne & Doug Heitmiller
December 1, 2020
I was always happy to see Pat at Alta Vista tutoring children. What a delightful man, a gift to have known him.
Marylaine Driese
December 1, 2020
Sandy and I offer our sincere condolences to Denny, Spike, and the entire Pattillo family, a uniquely gifted, kind, and caring family, indeed. Pat and I worked together for many years and I don´t recall a day when he wasn´t smiling and offering a new pleasant morsel of knowledge or a humorous story, with or without an object lesson. He made life more interesting and enjoyable for me and so many. We´ll miss him!
Skip Londos
December 1, 2020
Mr. Pat Pattillo was a fine gentleman who always had a smile on his face when we visited. With deepest sympathy at this time.
Bradford Willis
December 1, 2020