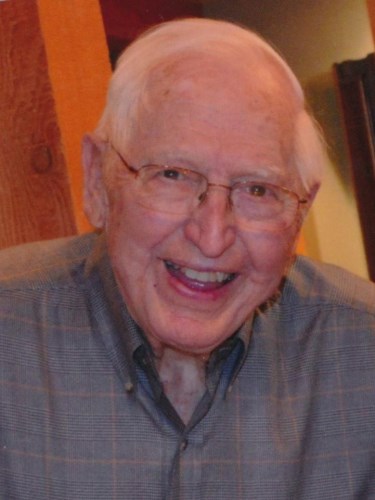 The son of Ewald and Amanda (Schwarzkopf) Lewer, Henry was born on November 23, 1927 in Waseca, MN. He was baptized and confirmed in St. John Lutheran Church, where he remained a lifelong member.

Henry attended school in Waseca, graduating from Waseca High School in 1945. He went on to study at Mankato State University, earning his Bachelor's degree in teaching. Henry had the opportunity to play college football, achieving All Conference Honors, and was voted by his peers as captain of the team in 1949. After college, Henry taught and coached briefly in Jackson, MN.

In June 1951, he married his college sweetheart and subsequent lifelong companion of 70 years, Phyllis Jacobsen. Henry returned to Waseca in 1952 to join his father in business at the Lewer Auto Company selling and servicing Dodge and Chrysler products. This successful business continued for 45 years until his retirement in 1997. During his career, Henry earned Dodge's Distinguished Dealer Award and Chrysler's Five Star Award for Excellence. He took great pride in earning the respect of his many repeat customers. Henry was awarded Waseca Business of the Year and Boss of the Year by the Waseca Chamber of Commerce. He gave back to the community by serving on the Boards of the Waseca County Historical Society and Waseca Roundbank.

Henry and Phyllis raised two children, Christine and Henry Jr., and enthusiastically participated in their lives, and those of his six treasured grandchildren.

Henry and Phyllis were unwavering University of MN Golden Gopher fans, holding season tickets in football and basketball for 40 years. In Henry's eyes, one could not get enough of Gopher sports.

Henry enjoyed traveling with his family, whether it be the thrill of a fly-in fishing trip to Canada, watching sunsets after the adventure of scuba diving in Grand Cayman, or experiencing the majesty of nature in Alaska, New Zealand, and the fjords of Norway. He also never tired of driving the two-lane highways of America.

While enjoying a highly satisfying life, one of his final wishes, as written in his life's diary was this: "I hope that I will be remembered as a man of integrity and kindness, who dedicated my life to my family." He certainly accomplished that in full.

Henry is survived by his daughter Christine Reichl (Stephen) of Minneapolis, MN, son Henry Jr. (Janie) of Lakeside, MT, and six grandchildren; John, Allison and Hannah Reichl, and Henry III, Jackson and Abigail Lewer. He was preceded in death by his wife Phyllis Lewer, the ultimate love of his life, and his sister Manda Faye Schultz.

There will be a private memorial service on March 29, 2021. The family asks that any memorial donations be made to the Waseca County Historical Society to support the Bailey-Lewer Research Library Maintenance Fund. Sympathy cards or memorial donations should be sent to Dennis Funeral Home at 109 3rd Street NE, Waseca, MN 56093.

To plant trees in memory, please visit our Sympathy Store.
Published by Waseca County News from Mar. 25 to Mar. 26, 2021.
MEMORIAL EVENTS
No memorial events are currently scheduled.
To offer your sympathy during this difficult time, you can now have memorial trees planted in a National Forest in memory of your loved one.
Funeral services provided by:
Kinder-Dennis Home For Funerals
GUEST BOOK
0 Entries
Be the first to post a memory or condolences.