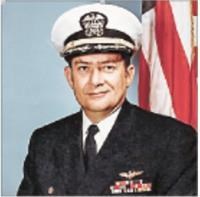 BORN
1926
DIED
2020
FUNERAL HOME
Pollock-Best Funerals and Cremations
2015 Neuse Boulevard
New Bern, NC
ALFRED NOEL FOWLER
Captain, USN (Ret.)
Died at age 93 on January 14, 2020. He was a resident of New Bern, North Carolina. He was preceded in death by his wife, Kathryn. Alfred, known as "Punk" to family, was born on August 29, 1926, in Waterloo, Iowa. He married his high school sweetheart, Kathryn (Katie) Shadle, on September 8, 1945. The profound love they shared as teenagers would last 70 years. He loved to tell tales of their lives together, of his boyhood with his brother Bob, and of their family connections, instilling a vision of perseverance and adventure that took the couple from their Iowa roots to a career in the military that included 16 moves before they finally settled in a Washington, DC, suburb after his Navy retirement in 1974. He and Katie lived in the Mantua neighborhood of Fairfax, Virginia, for 38 years where they were members of the Fairfax Presbyterian Church.
His memoir, Hurricanes to Antarctica - Tales of a Naval Aviator, highlights their journey and the wonderful yet challenging life of a military family. His companion book, Poems From Punk ¬- The Complete Collection, tells the story of young love and dreams for the future.
Captain Fowler graduated from Parks College of St. Louis University in 1948 with a degree in Aviation Operations. He was commissioned Ensign, U.S. Navy, and after completing Navy flight training was designated Naval Aviator in 1949. He was a Navy Hurricane Hunter from 1950-57. He and his crew accomplished many low-level penetrations of Atlantic area hurricanes. At that time, there was no other way to determine the location, size, and intensity of these dangerous storms. As a meteorologist he helped develop the use of airborne radar in tropical storm reconnaissance.
Captain Fowler's shore assignments included a tour as NROTC instructor at Tulane University and attendance at the Naval War College and the Air War College. He earned a master's degree in International Affairs from George Washington University, and in 1968-1970 he was executive officer aboard the aircraft carrier USS Kearsarge.
In 1972 he became the Commander U.S. Naval Support Force Antarctica, beginning his 25-year involvement in national and international affairs in Antarctica. He was the first captain in that job following a series of seven admirals starting with Adm. Richard Byrd. The military task force command included ship, aircraft, station and logistics operations, as well as the assignment as Senior U.S. Representative in Antarctica. He spent two six-month summer operating seasons "on the ice" and oversaw the completion of building a new station at the geographic South Pole. While serving as a LTJG in the Navy, his son, Tom, was able to travel to McMurdo Station, Antarctica, for a visit. On February 13, 1973, Al and Tom flew in a C-130 to the South Pole and became the first ever father and son to be at the South Pole together.
After he retired from the Navy in 1974 he took the position as Deputy Division Director, Polar Programs, at the National Science Foundation in Washington, DC. Captain Fowler oversaw logistics and science support operations in Antarctica as the responsibility and funding for the national program had been shifted from the Department of Defense to the NSF. He retired from civilian government service in 1988 and for the next 11 years was employed at the American Geophysical Union, where he served as the first Executive Secretary for the international Council of Managers of National Antarctic Programs. As the convener of the COMNAP committee, Captain Fowler was instrumental in the creation of the Antarctic Flight Information Manual.He is the author of COMNAP - The National Managers in Antarctica, a memoir about a special group of people from various nations who were involved with the governance and stewardship of the continent of Antarctica. Captain Fowler has been honored by the naming of the Fowler Peninsula, a 100- by 200-mile geographic feature of the ice-covered coastline of West Antarctica. His military honors include the Legion of Merit Medal, Navy Commendation, and Antarctica Service Medal. He was a longtime member of the American Meteorological Society, the U.S. Naval Institute, and The Antarctican Society.
Captain Fowler is survived by a son and three daughters: Alfred's son, Tom (Marilyn) Fowler and daughters, Beth (Matt) Maxwell, their children, Will and Kate; and Carol (Evan) Renneker and daughters Madeline and Evy; and son, Rob Fowler; and Alfred's three daughters: Becky Fowler; Susan Fowler, her daughters, Natalie (Curt) Douglas and their children, Ethan, Isabella, and Tyler; and Lindsay (Joe) Scardino, and their daughter, Rosalie; and son, Justin (Pamela) Brown and their children Tyler (Cindy), their son, Leon; Chandler (Jackie), Brynn, Gabriella, and Nathan; and Alfred's daughter, Janine (Ken) Sellers, and their son, Kurtis Hunt. He leaves behind a host of loving extended family members.
Funeral services will be on Saturday, January 25, at West New Bern Presbyterian Church at 3 p.m.. A reception will follow at the family residence. Interment will be at Arlington National Cemetery at a future date. Arrangements by Pollock-Best Funerals & Cremations, www.pollockbest.com. In lieu of flowers, consider a donation to the United Service Organizations, Inc. (USO) to support our service men and women and their families.
Published by The Washington Post on Jan. 20, 2020.
To plant trees in memory, please visit the Sympathy Store.
MEMORIAL EVENTS
Jan
25
Funeral service
3:00p.m.
West New Bern Presbyterian Church
NC
Funeral services provided by:
Pollock-Best Funerals and Cremations
MAKE A DONATION
MEMORIES & CONDOLENCES
1 Entry
My deepest sympathy to the family of Alfred Noel Fowler. May you be comforted in knowing that our Heavenly Father cares for you. He will give you strength and courage to cope with your grief.
Psalm 94:17-19
N. S.
January 20, 2020
Showing 1 - 1 of 1 results