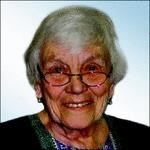 Barbara L. Chadsey
Barbara Chadsey, a former longtime resident of Chevy Chase, passed away on March 26, 2019, in Shepherdstown, WV. Barbara was born to Margaret Reising Mahrt and Peter Mahrt on June 4, 1930, in Napa, CA. In 1951, Barbara received her B.A. from the University of Redlands and married the love of her life, Orville Edwin "Chad" Chadsey. After living in California, Kansas and Pennsylvania, Barb and Chad moved to Chevy Chase in 1970, where Chad was called to the Chevy Chase Presbyterian Church to serve as Minister of Christian Education and Barbara began teaching at the Concord Hill School. Barbara was active in the life of Chevy Chase Presbyterian Church, where she loved teaching Sunday school, playing Mariners' bridge, and singing out the great hymns of praise every Sunday morning. She was a beloved first grade teacher at Concord Hill, bringing joy and a passion for education to her many students and their families until she retired in 1999. Barbara's greatest sadness was the death of her husband, Chad, in 1986. She found new life in the love of her grandchildren, whom she adored and who loved her unconditionally. She especially loved sharing with them the place she loved most, the Chadsey camp on Mousam Lake, Maine, where Barbara happily spent every summer of the last five decades of her life. Barbara lives on in the hearts of her children Mark R. Chadsey, Karen Chadsey Conant and husband, Tom Conant, Kristin Chadsey Stephens and husband, Al Stephens; her grandchildren Thomas Conant, Amy Conant Hoang, Rebecca Stephens, Kelly Stephens, Jake Stephens; and her many dear friends and former students.  A service in celebration of Barbara's life will be held Saturday, April 27, 1 p.m., at Chevy Chase Presbyterian Church, One Chevy Chase Circle, Washington, DC. Donations in Barbara's memory may be made to the Mousam Lake Region Association, PO Box 333, Springvale, ME 04083 and Springvale Public Library, 443 Main St., Springvale, ME 04083.
Published by The Washington Post on Apr. 17, 2019.
To plant trees in memory, please visit the Sympathy Store.
MEMORIAL EVENTS
Apr
27
Service
1:00p.m.
Chevy Chase Presbyterian Church
One Chevy Chase Circle, Washington, DC
MAKE A DONATION
MEMORIES & CONDOLENCES
5 Entries
Barbara was source of love, wisdom, guidance, and peace for all of Concord Hill School - student, teachers and staff. Her students adored her, and her colleagues at CHS felt so fortunate to have her as a friend and mentor. God bless Barbara.
william arzt
April 28, 2019
Our deepest sympathies go out to you and your family! Her memory, and love of Mousam will forever live on.
Much love, Donna & Chris
April 21, 2019
I would like to express my deepest condolences for your loss. May God comfort and strengthen you during this difficult time.
Shawn
April 17, 2019
My heartfelt sympathy goes out to your family at this difficult time. Please find peace in knowing that God understands your grief and that He cares.-1 Pet 5:6,7.
DJ
April 17, 2019
My condolences to the family. May the peace of God and the fond memories you cherish comfort and sustain you in your time of need.
-RM
April 17, 2019
Showing 1 - 5 of 5 results