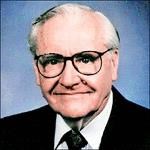 FUNERAL HOME
Everly-Wheatley Funeral Home
1500 West Braddock Road
Alexandria, VA
CHARLES WILLIAM ROHRER
Charles W. "Bill" Rohrer, born April 16, 1921, slipped peacefully away on May 2, 2018, at age 97. Bill was born in Cumberland, Maryland, the son of Charles Webster Rohrer and the former Kathryn Wallace. He graduated from Allegany High School there in 1939 and Catherman's Business School, also in Cumberland, in 1940. In 1947 he married Patricia Doerner of Cumberland. He is survived by his sons Michael, Christopher and Charles Rohrer and his daughter Nancy Rohrer Sanchez plus five grandchildren and three great grandchildren. Following his discharge from the Army in 1946, he joined the United Nations Military Staff Committee in New York City. For several years he attended evening classes at Columbia University and Long Island University, earning a bachelor's degree in modern languages magna cum laude from L.I.U. in 1956. Returning to Washington in 1957, he was assigned first to the Office of the Chief of Engineers, then in 1961 to the then newly established Army Materiel Command's installations and personnel directorates, where he headed the plans and administration office. He retired in 1983, receiving the AMC commander's award for civilian service. Bill and his wife Pat both loved music, especially the great musicals from the golden era of Rodgers and Hammerstein, Lerner and Loewe and others. Together with wife Pat, a well-known professional pianist in Alexandria until her death in 2014, he composed and recorded an album of songs titled "Mostly Love". Genealogy was his chief hobby in recent years. Bill was an active member of St. Rita's Catholic church in Alexandria since 1957. Visitation will be held Friday, May 11 from 2 to 4 and 6 to 8 p.m. at Everly-Wheatley Funeral Home, 1500 W. Braddock Road, Alexandria, VA. Funeral will be Saturday May 12 at 12 Noon, St. Rita's Church, 3815 Russell Road, Alexandria, VA.
Published by The Washington Post on May 9, 2018.
To plant trees in memory, please visit the Sympathy Store.
MEMORIAL EVENTS
To offer your sympathy during this difficult time, you can now have memorial trees planted in a National Forest in memory of your loved one.
Funeral services provided by:
Everly-Wheatley Funeral Home
MAKE A DONATION
MEMORIES & CONDOLENCES
1 Entry
God Bless the Rohrer family and Mr Rohrer.
May he rest in peace.
John E. Schlosser III
Friend
May 9, 2018
Showing 1 - 1 of 1 results