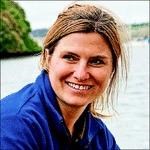 BORN
1970
DIED
2020
Claudine Katherine Weber-Hof
A resident of Antdorf, Germany, Claudine Katherine Weber-Hof passed away suddenly in Munich on January 16, 2020. Claudine was born on September 30, 1970 in St. Louis, Missouri to Elaine Shea and Frederic Hof. As the daughter of an army officer, Claudine traveled extensively in childhood, attending the American School in Tunis, Tunisia 1979-1980. She graduated from St. Agnes School, Alexandria, Virginia in 1988 and the Georgetown University School of Foreign Service, Washington, DC with honors in 1992. Upon graduation Claudine was commissioned a second lieutenant in the U.S. Army and posted to Augsburg, Germany, where she would serve with distinction and meet her future husband, David John Weber. Claudine would leave military service, obtain a Master's Degree in Architectural History from the University of Virginia, and return to Germany to marry David in 1997. Claudine Weber-Hof's professional life centered on Spotlight Magazine in Munich, where she served as deputy editor-in-chief and travel editor. With Claudia Hellmann she authored two books: On Location: Cities of the World in Film (2006); and On Location 2: Famous Landscapes in Film (2007). She was a world traveler, animated by boundless curiosity and a love of adventure. In 2004 Claudine's life would be forever changed by the unconditional love of a feisty Jack Russel Terrier puppy named Lily. Claudine's passing is mourned deeply not only by her husband, parents, siblings, extended family, and friends, but by her Spotlight colleagues who admired her humanity, humor, and leadership, and by countless individuals touched and encouraged by her selflessness and generosity. The support she and her spouse gave to two Syrian families arriving to Germany in 2015 after fleeing Syria and crossing Europe largely on foot was typical of her compassion and empathy. Claudine is survived by her husband; her parents; maternal grandmother, Doris O'Connor Shea-Spivey; her father's spouse (Brenda); brothers Fred and Edward Hof; sister Brooke O'Gara; numerous cousins and nephews, and by colleagues, friends, and admirers fortunate enough to have known this remarkable woman. Claudine's family will have a private remembrance and celebration of her life.
Published by The Washington Post from Feb. 21 to Feb. 23, 2020.
To plant trees in memory, please visit the Sympathy Store.
MEMORIAL EVENTS
To offer your sympathy during this difficult time, you can now have memorial trees planted in a National Forest in memory of your loved one.
MAKE A DONATION
MEMORIES & CONDOLENCES
Sponsored by anonymous.
5 Entries
Im very sad about your death and Ill miss your stories at Spotlight.
Rest in Peace!
Rosi Schmid
March 4, 2020
I am very sad to read that Claudine Weber-Hof passed away.

Last year we exchanged some e-mails about language, literature, film and music.

Claudine seemed to be really interested, researched things I wrote and shared interests with me.

My last suggestion was that she could get a photograph of herself together with the sisters Brontë at Madame Tusseauds in London.

I got no response. I suppose, she was already ill at that time.

Although I hardly knew her, I am sad. She left an impression.
Dirk Wedekind
March 3, 2020
I am so saddened by this news. I remember Claudine from grad school at a woman of great beauty, inside and out, and tremendous integrity. She helped counsel me as I prepared for my own marriage. She was a great blessing to each person who came into her life. My heartfelt prayers to her family.
Jennifer Morvan
Friend
February 25, 2020
Our deepest sympathies and prayers are with you.
Jim Prince
February 24, 2020
Claudine twinkled.
She was the brightest star in our class. I will never forget that jolly laugh, and the thoughtfulness, kindness and astonishing intelligence she brought to everything.
I trust she will shine upon David and Lily, and her many, many friends forever.
Elizabeth Lugar
February 21, 2020
Showing 1 - 5 of 5 results