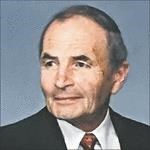 BORN
1927
DIED
2021
FUNERAL HOME
Everly-Wheatley Funerals and Cremation
1500 W Braddock Rd
Alexandria, VA
SIMONSON David C. Simonson David C. Simonson passed away at his home in Arlington, Virginia on Friday, August 27, 2021, at the age of 94. David was born in the Bronx, NY, May 9, 1927, son of Rebecca C. (Coolman) Simonson and Simon Simonson. He attended the (New York) High School of Music and Art, served in the U.S. Navy in World War II, and was a graduate of Hamilton College. He continued to study art for many years at the Art Students' League in New York City. He married Lois Sneider in 1952. David and Lois made Croton-on-Hudson, New York their home and raised three sons there. David served on the local planning board, village board of trustees, and as acting mayor of their small town. David worked at the Mt. Kisco, NY. Patent Trader, a semi-weekly newspaper covering Northern Westchester and Putnam Counties, starting as reporter and working his way up to be publisher. It was there that his clever wit and artistic talent yielded a twice weekly cartoon of suburban life that became a much anticipated feature of the paper. David and his family moved to Glenview, Illinois in 1977, where he became publisher and president of Pioneer Press, a subsidiary of Time, Inc. During his tenure at Pioneer Press, he expanded the business from 13 to 41 local newspapers in suburban Chicago. In 1987, he became Executive Vice President and Chief Operating Officer of the National Newspaper Association in Washington, DC, and he and Lois moved to Arlington, Virginia. After retiring in 1992, David served as a publishing consultant for the U.S. Information Agency, providing hands-on expertise to newspapers in Eastern Europe after the fall of communism, ensuring a free press would keep oppressive regimes in check. He also served as a newspaper publishing consultant in Africa for the United States Agency for International Development. In 1998 he received the Dean S. Lesher award for lifetime achievement from Suburban Newspapers of America. Throughout his career, and in retirement, David served others, whether fundraising for the Mt. Kisco Lions Club, as a board member of The Bowery Mission, as the correspondent for the Hamilton College class of 1947, or as a Board member of the Forest Hills Community Association. David was a voracious reader, enjoying one or two history books or historical novels each week. He had a distinctive sense of humor was particularly fond of mid-20th century cartoons and bad puns. David was a life-long Yankees fan, with an encyclopedic knowledge of the team. He enjoyed a good crossword puzzle, always doing the Post's daily puzzle in pen with breakfast, and wrestling with the Sunday puzzle. David C. Simonson was predeceased by his wife of 61 years, Lois, and is survived by his three sons and their wives, Peter and Lynne of Greenville, NH, Eric and Barbara of Darien, CT, and John and Helen of Brooklyn, NY. He is also survived by five grandsons, Matthew, Aaron, Ian, James, and Joseph Simonson, and two great-granddaughters, Emma and Kaylee. He leaves behind many close friends in his neighborhood and around the world. A memorial service will be held at 9:30 a.m. on September 11, 2021 at Everly Wheatley Funeral Home, 1500 W Braddock Rd., Alexandria, VA. In lieu of flowers, donations may be made to the Bowery Mission.A memorial service will be held at 9:30 a.m. on September 11, 2021 at Everly Wheatley Funeral Home, 1500 W Braddock Rd., Alexandria, VA. In lieu of flowers, donations may be made to the Bowery Mission.
Published by The Washington Post on Sep. 9, 2021.
To plant trees in memory, please visit the Sympathy Store.
MEMORIAL EVENTS
Sep
11
Memorial service
9:30a.m.
Everly Wheatley Funeral Home
1500 West Braddock Road, Alexandria, VA
Funeral services provided by:
Everly-Wheatley Funerals and Cremation
MAKE A DONATION
MEMORIES & CONDOLENCES
0 Entries
Be the first to post a memory or condolences.