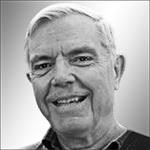 BORN
1935
DIED
2021
RASMUSSEN DONALD M. RASMUSSEN Of McLean Virginia died on Thursday, January 14, 2021. He was born February 7, 1935 in Chicago, Illinois, the youngest of six children of Henry and Gertrude Rasmussen. He attended St. Pascal's School in the Chicago suburbs and spent a year at Quigley Preparatory Seminary before transferring to Steinmetz High School. Don graduated in 1953 and entered the U.S. Air Force. After completing flight training at Williams Air Force Base (AFB) in Arizona and Perrin AFB in Texas, he was stationed both around the country and overseas, piloting the F86D and the F102 for the Air Defense Command. Some of his assignments included Tyndall AFB in Florida, Scott AFB in Illinois, Naha AFB in Okinawa, Japan, and Tainan AFB in Taiwan. After leaving the Air Force in 1963, Don flew as a commercial pilot for Eastern Air Lines, based in the Washington, DC area, until his retirement and the airline's dissolution in 1991. Following his retirement from Eastern, Don served his local McLean community as the Facilities Manager at St. John the Beloved Parish in McLean and as the "fix-it-up chappie" at McLean Hardware. Don met Julia Lane in 1964 through a mutual friend. Don and Julie were married on February 6, 1965. He was utterly devoted to her and their three daughters and was devastated when she died suddenly in 2009 at the age of 67. They had been married for almost 45 years. Don was known for his friendly, kind, and generous manner, but especially for his witty and playful sense of humor and excellent storytelling. He had an encyclopedic knowledge of all things aviation and automotive, especially classic Jaguars. He was able to fix almost anything, and valued quality and craftsmanship. Don loved animals and always had peanuts on hand to feed his retinue of devoted crows and squirrels (and even an occasional fox!). We are sure he was met at the "Rainbow Bridge" by the many dogs and other animals he loved during his life. He also loved children and was a patient, fun, and loving father and grandfather to his daughters Kathleen, Jean, and Mary, and to his seven grandchildren - Alex, Chris, Stephen, Julie, Katie, Sarah, and Kristen. Don was preceded in death by his parents and older siblings, by his beloved wife Julie and her parents and siblings, and by many dear friends. Surviving him and carrying on his memory are his daughters Kathy de Paolo, Jean Duetsch (Tom), and Mary Allain (Noel); his seven grandchildren; numerous nieces and nephews and their children; and many friends made throughout the years, especially his dear childhood friend Phil Pickett and Air Force roommate Marv Schwarz. The family would like to thank the wonderful home health aides and hospice nurses who provided such loving care for Don in his final illness, especially Lauren, Carmelita, Matt, and Mandy. We are also grateful for all those who called, sent cards, or said prayers for Don. His spirits were lifted by your love and care. A Funeral Mass will be held at St. John the Beloved Catholic Church in McLean on Friday, January 22 at 12 p.m., followed by a private burial service at Fairfax Memorial Park. Please follow the link https://livestream.com/stjohnmclean to view the funeral Mass livestream. Due to the pandemic, a celebration of Don's life will be planned for the summer of 2021. Donations to honor his memory may be made to St. Jude Children's Research Hospital (https://www.stjude.org/) or the Sisters of Life (https://sistersoflife.org/). To share condolences with the family please visit https://tinyurl.com/DonaldRasmussen Donations to honor his memory may be made to St. Jude Children's Research Hospital (https://www.stjude.org/) or the Sisters of Life (https://sistersoflife.org/). To share condolences with the family please visit https://tinyurl.com/DonaldRasmussen
Published by The Washington Post on Jan. 20, 2021.
To plant trees in memory, please visit the Sympathy Store.
MEMORIAL EVENTS
Jan
22
Service
12:00p.m.
https://livestream.com/stjohnmclean
DC
Jan
22
Funeral Mass
12:00p.m.
St. John the Beloved Catholic Church
McLean, DC
MAKE A DONATION
Please consider a donation as requested by the family.
MEMORIES & CONDOLENCES
2 Entries
I flew many a trip on EAL with Don as the pilot. Always treated his co-workers with respect and had a good sense of humor. May God bless Don and his family
Joan Singh
Coworker
January 22, 2021
Condolences from the Howard’s. Don was an extremely patient and understanding next door neighbor for more than 20 years. May there be a XK 120 waiting for him. Matt.
Howard
January 22, 2021
Showing 1 - 2 of 2 results