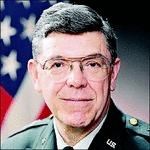 EDWARD JAMES HUYCKE, M.D.  Major General USA (Retired)
Edward James Huycke died March 31, 2018, at his home in Oklahoma City, OK. He was born July 22, 1928, in Ellsworth, KS, to Edward Jesse and Rose Fern Huycke. In 1953, Dr. Huycke was graduated from the University of Kansas with a Doctor of Medicine degree. While at KU, he was a Summerfield Scholar and member of the Beta Theta Pi, Phi Beta Kappa, and Alpha Omega Alpha fraternities. From 1953 to 1954, he studied physiology at the University of Copenhagen as a Fulbright Scholar. From 1955 to 1985, he served in the U.S. Army, retiring with the rank of Major General. From 1966 to 1967, he commanded the 1st Medical Battalion of the 1st Infantry Division in the Republic of Viet Nam, earning the Silver Star for gallantry. From 1978 to 1983, he commanded the Tripler Army Medical Center in Honolulu, HI. His final U.S. Army assignment was as Deputy Surgeon General. From 1985 through 1997, he served as Chief of Staff at the Veterans Affairs Medical Center in Wichita, KS. He was predeceased by his first wife, the former Mary Ann Suderman of Newton, KS, in 1995 and by his second wife, Betty Bradley of Oklahoma, OK, in February 2018. He is survived by his six children: Dr. Edward Carl (Melanie) of Arlington, VA; Dr. Ann of Boise, ID; Dr. Mark (Amy) of Fayetteville, AR; John (Colleen) of Denver, CO; Paul (Rebecca) of Luther, OK; Kathleen of Arlington, VA, and 13 grandchildren and one great-grandchild.Funeral services and interment will be held at Arlington National Cemetery.
Published by The Washington Post on Apr. 19, 2018.
To plant trees in memory, please visit the Sympathy Store.
MEMORIAL EVENTS
To offer your sympathy during this difficult time, you can now have memorial trees planted in a National Forest in memory of your loved one.
MAKE A DONATION
MEMORIES & CONDOLENCES
0 Entries
Be the first to post a memory or condolences.