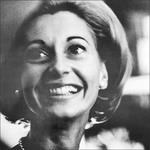 Enud Aniko McGiffert
Died peacefully on February 12, 2017 in Washington surrounded by family and friends. She was 81. Enud Von Kibedi Varga was born in Budapest, Hungary in 1935. She and her family fled Hungary during World War II to Germany before coming to the United States in 1950 and settling in Poughkeepsie, New York, where she completed high school. She graduated from Manhattanville College in 1956 and moved to Washington, where she taught English as a second language at Georgetown University and later American University. In the late 1970s, Enud pursued her Master's degree in social work to support homeless and at-risk children. Later, she became an entrepreneur, opening her own public relations firm, which served clients such as King Hussein of Jordan. In 1992, she returned to Budapest, where she taught English and led life skills trainings. In 2009, she retired and returned to Washington. Enud was known by friends as glamourous, passionate, and free-spirited. She was a staunch supporter of social justice and civil rights, worked to end world hunger, and volunteered on several political campaigns. She is survived by two daughters from her marriage to David E. McGiffert from whom she was divorced, Carola McGiffert and Laura M. Slover (Bill), both of Washington; three grandchildren; a niece; two nephews; and a brother, Gabor Von Varga of Germany. A gathering to celebrate her life will be held on May 13. Contributions in her memory may be made to The Homeless Children's Playtime Project, 1525 Newton Street NW Washington, DC 20010 or http://www.playtimeproject.org/
Published by The Washington Post on Feb. 26, 2017.
To plant trees in memory, please visit the Sympathy Store.
MEMORIAL EVENTS
To offer your sympathy during this difficult time, you can now have memorial trees planted in a National Forest in memory of your loved one.
MAKE A DONATION
MEMORIES & CONDOLENCES
6 Entries
I'm grateful to meet her and feel lucky to learn a lot from her. Nice memories and love in my heart.
Marianna Kutics
March 27, 2017
I'm grateful to meet her and feel lucky could learn from her. Nice memories in my heart.
Marianna Kutics
March 27, 2017
Enüd taught me how to become a loving partner in my relationships and a lot more. We met in Budapest and worked together a year in 1999. I am grateful that we have met. If Carola or Laura could reach me at [email protected] and let me know how she lived her life after moving back from Budapest, I would be glad. :-)
Piroska Kátai
March 26, 2017
Enüd and I were dear friends for over 40 years. Her enthusiasm was infectious and inspired me to explore paths that changed my life forever. My heart goes out to Laura and Carola.
Muriel Vasconcellos
March 12, 2017
I think she was a bodhisattva. I am very grateful to know her.
Reka
March 5, 2017
Dear Carola and Laura,
I'm so sorry about the loss of your sweet mother.
I have many nice memory of her during those years when she taught in Hungary.
I was one of her very close assistant during that time.
The conection with her was extremely valuable in so many ways.
I will never forget her and always be greatful.
Stay strong, all the best!
Edit Soltesz-Edwards
Edit Edwards
March 3, 2017
Showing 1 - 6 of 6 results