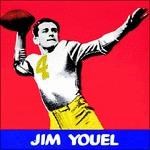 BORN
1922
DIED
2020
YOUEL James Stewart Youel (Age 98) Of Fort Madison, Iowa died at 6:18 p.m. on April 9, 2020 in Traer, Iowa. Jim was born February 13, 1922 in Vinton, Iowa, the only child of Irmel L. Youel and Nelle (Stewart) Youel. While Jim was a young boy, the Irmel Youel family moved to Fort Madison, Iowa. Jim graduated from Fort Madison High School in 1939, lettering in football, basketball, and track. He then attended the University of Iowa on a football athletic scholarship, lettering in football for three years. In 1943, Jim was the nation's 3rd leading punter and was named to the All-America Team. Youel graduated with a degree in mechanical engineering and went to work for McDonnell-Douglas Corporation in California, designing airplane propellers for the war effort. Jim served in the United States Navy from 1944-1945, stationed at the Great Lakes Naval Training Center. At the Great Lakes, Youel played quarterback for Coach Paul Brown, later of the Cleveland Browns. After his time in the Navy, Jim was drafted into the National Football League where he played for the Washington Redskins. Youel served as the understudy for three seasons to NFL Hall of Famer, Sammy Baugh. It was Sammy Baugh who introduced Jim to Geraldine (Gerry) Sullivan who became his wife. After retiring from the NFL in 1948, Youel worked in Washington, DC as an engineer for a construction company. In 1954, Jim returned home to Ft. Madison, IA and started a career at Ft. Madison High School as a mathematics teacher and head football coach, eventually adding athletic director to his duties. Fort Madison High School has had three undefeated football seasons: 1917, and Jim Youel's teams of 1961, and 1966. Jim finished his teaching and coaching career at Danville High School and retired in 1987. In 1988, Youel was inducted into both the Iowa Football Coaches Hall of Fame and the Fort Madison High School Athletic Hall of Fame. In 2008, FMHS honored Jim by naming the high school's football stadium field "Jim Youel Field'. Jim is survived by four children: Leisa Youel, MD MS of Longwood, FL, Curt (Therese)Youel of Crystal Lake, IL, Josh (Cindy)Youel of Traer, IA, and Tish (Job)Keltner of Burlington, IA. He is also survived by seven grandchildren: Cayla (Matt)Swift of Iowa City, IA, Benjamin Youel, DDS MS of Chicago, IL, Gabriel Youel of Chicago, IL, Dylan Youel of Cedar Rapids, IA, Nelle Youel of Crystal Lake, IL, Josie (Dalton) Hulme of Traer, IA, and Evelyn Youel of Crystal Lake, IL. Jim also has two great grandchildren, Gabriella and Ashton Swift of Iowa City, IA. Jim's long-time friend and companion, Carolyn Elwell of Ft. Madison, IA also survives him. Jim always had a great appreciation for Carolyn's many talents and the company she provided him during their years together. Jim was preceded in death by his parents, his daughter, Jolie Youel of Paisley, FL in 2019, and his granddaughter, Maggie Youel of Crystal Lake, IL in 2015. Jim had many great football stories but his favorite involved his Hawkeye teammate Nile Kinnick, the University of Iowa's only Heisman Trophy winner. According to Jim: "In the fall of 1939, I was 17 years old on the Iowa football team. Freshmen were only allowed to serve as the practice team for varsity scrimmages. My buddy, Tom Farmer, and I were on the sidelines praying our numbers would not be called to play defense against the varsity. As we looked at the Ironmen of 1939, we thought we would be killed because those guys were huge! Farmer's number was called for the first play and he left the field on a stretcher. My number was called for the second play. On that play, I made a lucky tackle of Nile Kinnick. As I lay on the ground after, I first thought my football career at Iowa was over. But as Kinnick got up and returned to the huddle, he passed by me and said, "Nice hit Jim'." In accordance with his wishes, Jim Youel's body has been donated to the anatomy department of the University of Iowa and there will be no service or memorial fund. Sympathy cards can be sent to: Josh Youel, 209 Taylor St., Traer, Iowa 50675. In accordance with his wishes, Jim Youel's body has been donated to the anatomy department of the University of Iowa and there will be no service or memorial fund. Sympathy cards can be sent to: Josh Youel, 209 Taylor St., Traer, Iowa 50675.
Published by The Washington Post on Apr. 17, 2020.
To plant trees in memory, please visit the Sympathy Store.
MEMORIAL EVENTS
To offer your sympathy during this difficult time, you can now have memorial trees planted in a National Forest in memory of your loved one.
MAKE A DONATION
MEMORIES & CONDOLENCES
3 Entries
Mr. Youel was an inspiration to me! I had an extremely hard time grasping geometry (back in the early 60's), and he took extra time with me to help me understand the concepts. Once I understood, I loved it, and got straight "A"s! In fact, I loved it so much, he gave me a geometry book for graduation! I also babysat for them, and cleaned their house. As he drove me home after babysitting late at night, he explained football to me, for which I am still extremely grateful! He was kind, considerate, and loving to his family. A great man!
Lynette Mincks
April 17, 2020
Jim was one of my most favorite teachers in high school lots of good memories talking with him my thoughts are with the family
Kelly Beckert
Student
April 15, 2020
Coach Youel was a great football coach and motivator of young men. I played on his team in 1966, 1967 and 1968. He encouraged a 155 Lb guy to play as Tackle against 220 lb players from Washington, Mt pleasant etc. It actually was a good experience! He told me to play smart and not get killed!
The team spirit was a major highlight of high school.