Of Middleburg, VA, died peacefully in her sleep of a heart attack on Friday, May 6, 2005 at age 66. She was the daughter of Air Force General Henry Kristofferson, so the family moved frequently from Texas and California to Hawaii and finally to Saudi Arabia, where the General became Aviation Manager of Aramco. Mrs. Kirschenbauer met her husband, George, while she was teaching school for American children in Wiesbaden, Germany, where George, a West Point graduate and then Army Lieutenant, was stationed. They married there in 1965 and subsequently had three sons. During his career, while attaining the rank of full Colonel, the Kirschenbauers moved 17 times, including two tours of duty in Vietnam, three years at West Point, as well as the Army War College in Pennsylvania and Washington, D.C. They retired to Middleburg 13 years ago where they have both been active politically and involved in preservation issues. After their sons were grown, Mrs. Kirschenbauer, a charismatic, joyous lady with a keen sense of humor, decided to pursue a career in acting, which resulted in roles in many movies, including Sommersby, The Jackel and The Exorcist III. Television parts included Unsolved Mysteries and America's Most Wanted, as well as playing a role opposite Vanessa Redgrave in The Locket. Then commercial roles for industries such as Jamaica Tourism, Giant Foods, Tide Detergent, Fixodent, and Fosamax took her to many different filming locations. Noted for her lean, lanky figure, long gray hair and dazzling smile, Mrs. Kirschenbauer set an example for anyone interested in pursuing a career and achieving success regardless of age or experience. "Hard work, dedication and persistence do pay off," she said.

She is survived by her beloved husband, Colonel George Kirschenbauer; three sons, Kraig and his wife, Karen of South Riding, VA, Kevin and his wife, Amy of Clarke County, VA and their daughter, Heather and Kirk, who is being married to Marisa Yee on May 28 in California. She is also survived by two brothers, Kraig Kristofferson, V.P. of Coldwell Banker in California, and Kris Kristofferson, the musical icon of the 1970's, of Hawaii.

A celebration of Karen Kirschenbauer's incredibly full and joyous life will be held at the Kirschenbauer's home at 21951 Wainway Lane, Middleburg, VA, on Saturday, May 14, from 3 to 6 p.m. All of those who knew and loved her are invited to join in the celebration.

Published by The Washington Post on May 11, 2005.
To plant trees in memory, please visit the Sympathy Store.
MEMORIAL EVENTS
To offer your sympathy during this difficult time, you can now have memorial trees planted in a National Forest in memory of your loved one.
MAKE A DONATION
MEMORIES & CONDOLENCES
10 Entries
George and Family,
I learned of Karen's death while visiting my brother, Tom Simcox, and family. I heard wonderful stories of Karen, and I want you to know if there is anything I can do to help you and your family to please contact me. You and your family are in my thoughts and my prayers. Just remember how blessed you are to have had such a wonderful person as your wife, your mother, and your sister. God bless you and hold you in the palm of His hands.
ANN FONFARA (SIMCOX)
May 12, 2005
I found out about her passing through the Kris list and can tell from all the notes how much love there is in this family. My thoughts and prayers go out to the entire family. May God give you peace and strength.
Rhonda Cowan
May 12, 2005
Karen was a beautiful and special person. She was a dear friend of my parents and I will never forget her great smile and many other great traits that she had. She was always so thoughtful and so wonderful to her sons and her husband. I will miss you and will remember you forever for being such a wonderful person to so many people in this world!!
Rebecca Mahnker
May 11, 2005
I never had the opportunity to meet Karen. I just know that Kris, her brother, thought the world of her and George.

Kris talked about how Karen would call radio stations relentlessly requesting his songs.

It is very difficult on the family when a person passes unexpectedly. While a death is never easy, when there is an illness you do prepare yourself for the inevitable. When it is sudden, you don't have the opportunity to tell the person goodbye. For Karen there isn't a better way to pass than in your sleep. For those who are left, it is very hard to cope with.

My heart goes out to the entire family. She will be greatly missed by so many.

With deepest sympathy,
Janelle ZUk
May 11, 2005
I was so saddened to hear about Mrs. Kirschenbauer's death. I've loved hearing Kraig and Karen's stories about her over the years and know how she will be missed by her family and friends alike. My thoughts are with your family.
Rebecca Vaurio
May 11, 2005
I am a big fan of Karen's brother, Kris and I never tired of seeing Karen's smiling face on TV. She always had that radiant smile. May God bless her family with His peace and comfort until they are re-united with her again someday. God bless you.
Susan Dever
May 11, 2005
I am a member of the Kriskristoffersonlist on Yahoo and a fan for more years than I care to remember. Karen's family has my deepest sympathy. I know she will be missed by many. She was always easy to recognize in a commercial by her big smile! God bless her family and give them comfort.
Rita Friedrich
May 11, 2005
I will miss Karen's lovely face and spirit. Having been a Kris-Fan for many years, naturally I would have learned about Karen's work in film and commercials.
"This is an Amazing Age".
I will never again hear those words without thinking about her. My deepest sympathy to her family members...............
Riki Fiester
May 11, 2005 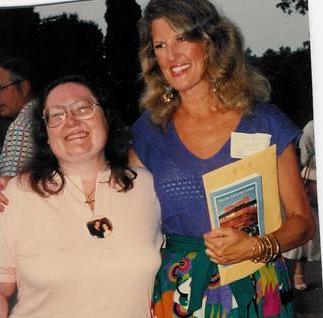 I first met Karen through her mother,Mary, & her brother,Kris. I met with her & her sons at Kris's concerts in Virginia, Maryland, Washington, DC, and New York City. I loved catching up with her news with her Christmas letters. She would send me a card when she would be in a movie, TV show or commercial. Karen was truly a sweet, loving lady. I am so saddened by her passing. I will miss her. My condolences to George, Kraig, Kevin, and Kirk, and her brothers.
Sharon Hulton
May 11, 2005
I'm a big fan of Kris. I moderate the KrisKristoffersonList on yahoo. I certainly appreciate what Karen accomplished, and she's right about persistence: my first published novel will be out in July--at age 73. I know Karen will be remembered with love and joy.
Johanna Fallis
May 11, 2005
Showing 1 - 10 of 10 results