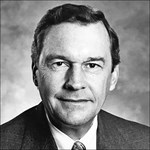 BORN
1938
DIED
2017
SWANN Lance Blanchard Swann Lance Blanchard Swann died peacefully at Washington Home and Community Hospices of Washington DC on Friday, September 29, 2017 after a long battle with prostate cancer. He was surrounded by his loving family. Lance was born on October 11, 1938 in Canton, OH to Edward Russell Swann and Eleanor Blanchard Swann. He grew up in North Canton, OH and graduated from Hoover High School in 1956, where he was president of his senior class and captain of the football team. He attended the University of Michigan and was a member of Lambda Chi Alpha Fraternity. He left to join the Army in April 1957 as a paratrooper in the 1st Airborne Battle Group and was selected to attend Officer Candidate School where he rose to the rank of first lieutenant. Following his active military service in 1959, Lance received a scholarship to attend Wittenberg University and was also awarded a three-year NASA graduate fellowship to study flight science and engineering at Columbia University in a combined program in which he received both an MS in Engineering Mechanics from Columbia University, NYC; and a BA in Mathematics and Physics from Wittenberg University, Springfield, OH in 1964. After his graduation, Lance worked as an engineer for IBM in Atlanta, GA for four years and then started a technology consulting company in New Orleans, LA. As an active member of the Republican Party, Lance joined Richard Nixon's presidential campaign as an advance man. After Nixon's election, Lance received a presidential appointment to become director of special projects at the General Services Administration (GSA). At GSA he was responsible for developing an equitable method of selling three million Carson City silver dollars which were minted during Abraham Lincoln's administration to encourage Nevada to join the Union Army. However, the coins were never circulated and were stored in a vault in California where they became the responsibility of GSA. During his campaign to sell the coins, Lance coined the slogan, "The Coins Jesse James Never Got." At GSA, he was also given the responsibility for deciding how the Watergate tapes would be released to the public. He devised a set of regulations that Congress passed which allowed GSA to announce that the tapes were available to the public, knowing that the release would be contested legally for years and thus delay the actual public access. After Nixon left office, Lance joined Computer Sciences Corporation in Falls Church, VA in 1976 and retired after 33 years as Vice President of Government Relations in April, 2009. Lance was a member of the Capitol Hill Club and the National Democratic Club, both on Capitol Hill. He was also a member of the Bonita Bay Club in Bonita Springs, FL. He and his wife of 27 years, Elaine Dauphin traveled extensively in Europe, Asia, Australia, New Zealand, Canada and road trips in the United States with their beloved dogs Winston and Frida. Lance is survived by his wife, Elaine Dauphin; seven children, Wendy McNally and husband, Rich McNally of Arlington, VA; Scott Swann and wife, Gina Swann of Colleyville, TX; Carrie Swann and wife, Hilary Swann of Silver Spring, MD; Mandy Swann and husband, Daniel Reed of Roanoke, VA; Alair Brown and her husband, Todd Brown of Lagos, Nigeria; Ashley Henderson and husband, James O'Dowd of Oakland, CA; Michelle Hallinan and husband, Brett Hallinan of Menlo Park, CA; and 15 grandchildren, Erin Brown, Paige Brown, Chad Brown, Tony Swann, Gillian Swann, Sophie McNally, Ella McNally, Connor McNally, Jimmy O'Dowd, Jesse O'Dowd, Finn Hallinan, Remy Hallinan, Zelig Swann, Ravi Swann and Hewitt Swann. A Celebration of Life will be held on November 25 in Chevy Chase, MD. In lieu of flowers, please consider a gift to the Georgetown Comprehensive Cancer Clinic at tinyurl.com/givelombardiIn lieu of flowers, please consider a gift to the Georgetown Comprehensive Cancer Clinic at tinyurl.com/givelombardi
Published by The Washington Post on Oct. 8, 2017.
To plant trees in memory, please visit the Sympathy Store.
MEMORIAL EVENTS
Nov
25
Celebration of Life
Chevy Chase, FL
MAKE A DONATION
MEMORIES & CONDOLENCES
5 Entries
Elaine, My deepest and very sincere sympathy to you and your family. Always enjoyed being around Lance, one of my favorite people in our industry.
Bill Rico
Acquaintance
November 8, 2017
Lance & I shared several activities in high school. I am saddened by his passing. My sympathy to his family.
Marilyn McDaniel
October 26, 2017
My deepest sympathy to Lance's family. Lance was my classmate and friend at Middlebranch and then North Canton.
Janet Kintz Rogers
October 25, 2017
Elaine, and all of Lance wonderful family. Our deepest sympathy for your loss. Lance was a gifted man with a great sense of humor and never met a stranger.He will be missed. A fellow classmate "56".
Don Strausser
October 25, 2017
During my tenure at CSC, I had the pleasure to know and work with Lance. He was always respectful, professional, easy to talk to and work with, trustworthy, and true to his word. I am happy to have had the opportunity to know him and I send his family my deepest condolences as I am certain he will be missed by them and the many friends he made during his time here with us. Once again, I am so sorry to hear this and my prayers for him, Elaine and family.
Frank Zemrose
October 17, 2017
Showing 1 - 5 of 5 results