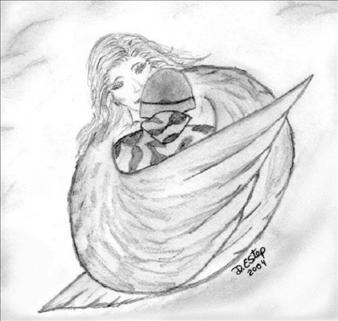 Holding you all in my thoughts and prayers.


The Wind on The Downs

“I like to think of you as brown and tall,
As strong and living as you used to be,
In khaki tunic, Sam Brown belt and all,
And standing there and laughing down at me.
Because they tell me, dear, that you are dead,
Because I can no longer see your face,
You have not died, it is not true, instead
You seek adventure in some other place.
That you are round about me, I believe;
I hear you laughing as you used to do,
Yet loving all the things I think of you;
And knowing you are happy, should I grieve?
You follow and are watchful where I go.”

Two lines that I wish you to keep near your heart…….

“You seek adventure in some other place.
That you are round about me, I believe”


I did not know Marc, but I am remembering
his service. He is my hero. !

can you feel me there with you?
my breath is gone but i'm not through.
loved you then and i still do
from over on the other side.

i can fly. really fly.
below the earth ... all through the sky.
tell em all i did not die.
i'm just over on the other side.

i can fly. really fly. below the earth...all through the sky.
tell em all i did not die.
i'm just over on the other side

the world is smaller than a needle's eye.
where life and death softly divide.
when you leave your skin and bones behind
i'll be waiting on the other side.

i can fly. really fly. below the earth ... all through the sky.
go tell em all i did not die.
i'm just over on the other side.

Angel and soldier drawing I have shared here.
http://tinyurl.com/6gey8b
August 2, 2008 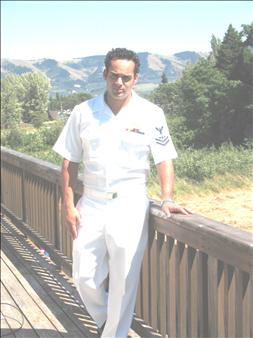 July 29, 2008
You are remembered and respected. Thank you Petty Officer 2nd Class Lee!
June 1, 2008
To the Family of Marc Lee,
I served with Marc Lee on the USS Dwight D. Eisenhower in the Transportation Department where we drove buses all day long. He spoke about his dream of becoming a US Navy SEAL and I shared my dream of becoming a Police Officer. His words of encouragement helped me reach my dream. I just found out today of his sacrifice and am very sad. You have my deepest sympathy.
Sincerely,
Jennifer Thomas.
Jennifer Thomas
April 13, 2008
Dear Debbie and Family

I just wanted you to know that I saw a copy of your beautiful Veteran's Day 2007 message...

As you requested, I've shared it to others.

Maybe you could share it here on Marc's Legacy site. :)

Remembering Marc and all who have served this country.
To those who have given all,
I will never forget.

Sincerely,
Debra Estep
PAFM - Vinny - Iraq vet
PAFMIL- Dana - Iraq vet
Debra Estep
November 11, 2007
I want to be counted among those who shed tears at your loss. I would have loved to know you two together, just as I loved you as a little girl and never forgot.
George Roberts
September 1, 2007
There is nothing that I can say or do to take away the pain or bring you peace in your time of sorrow, but I will offer you and your family my heart felt condolences. I also offer you my prayers that in time the pain will easy and the memories of your HERO will carry you through each day and night. I want to thank your HERO, for his/her selfless act of becoming a member of the armed forces, his/her willingness to defend the United States of America, all that we hold sacred and for the sacrifice that will forever be etched in the memories of all those who knew him/her. Though tears can never bring him/her back, we hope that our tears express our gratitude for the sacrifice that he/she made and our sorrow at his/her passing. I believe for every fallen HERO there is a star shining brightly up above to remind us of the precious gift we were given.

Your mission on earth is complete and you are now a member of GOD’s Heavenly armed forces. Stand down brave warrior and take your rightful place in Heaven with all the HEROES who have passed before.

I made a special promise to LE RON A. WILSON, a dear family friend who joined the Army with three other friends, one of whom is my son (Le Ron was killed in action on 07/06/07 at the age of 18) on the day he was laid to rest as I touched his coffin, that I would never forget him nor would I forget those that gave their lives for our country before him, with him and after him and so when I came across www.legacy.com, I thought what a great way to keep my promise to Le Ron, so I will continue to leave tributes in each guest book until the day there is no longer the need to leave these tributes to a FALLEN HERO.

REST IN PEACE, HERO, YOU WILL NEVER BE FORGOTTEN!!

PROUD MOTHER OF A U.S. SOLDIER
Currently stationed in Germany
Althea Barrett(Queens, NY)
August 17, 2007
Thank you for the sacrifice made by Petty Officer 2nd Class Lee and the sacrifice made by everyone who loves and misses him! May God bless all of you!!
July 30, 2007
First, I would like to say that Marc left a legacy, a legacy that will never die as long as I live. His friendship was truly genuine with alot of laughs, this guy could make anyone crack up at any moment. I miss this guy more everyday, but I look at how he died and would not expect anything different from him. Thats the kind of friend he was, he was gifted in loyalty period. I hope that anyone who reads this understands that his death was not in vain, its an inspiration. Marc....you will always be remembered guy, see ya!
James Truesdell
July 5, 2007
I served with Marc on the Eisenhower back in 2002-2005. We drove nasty navy buses together. I am proud of Marc, but I sure do miss him. He was a brother in Christ and arms whom I respected and many others.
Arrick Creamer
June 20, 2007
To the Family of Marc Lee, First of all we want to thank you for your sacrifice, we being the family of Navy SEAL Danny Phillip Dietz Jr. can share your pain and loss but can always be sooo proud of our loved ones accomplishments they along with all who have layed down their lives are true opitimies of honor. We send our love.... The Dietz Family...
Cindy Dietz
May 30, 2007
My
heartfelt sympathy to the Lee family in the loss of Marc. I did not
know Marc, but my heart is broken and I am saddened for your loss of
such a fine young person and hero. May God bring you peace in your
heart as you reflect on all the wonderful memories you hold so close.
Please know that you are in my heart and prayers. Marc you are my hero
and you will NEVER be forgotten.
I send each of you a hug from the most inner part of my heart.
Love and Peace
Tom
To live in the hearts of those you leave behind is never to die"
~Robert Orr~
Tom Gugliuzza-Smith
September 11, 2006
Military Parents,
The Cobbs
September 2, 2006
To the Family of Petty Officer 2nd Class Marc A. Lee:
My heart breaks again as I sign yet another guest book of another courgeous young soldier who gave their life so selflessly. I wish I never found myself in a position to have to sign another guestbook for the rest of my life. We lost a son 12/1/05 and it seems like yesterday.
I know first hand there are no words right now that will bring you the comfort and peace you need. Just know that you are not alone. My heart, thoughts, and prayers are with you all as you mourn this loss. We don't know each other, will probably never meet, but will forever be united in the loss of our Heroes. We have, unfortunately joined a group none of us wanted to join, an ever-growing group of families in this situation. May God grant you peace and strength to get through this and be able once again to smile at a memory rather than have only the tears that flow so easily now. To be so proud of your loved one and so saddened at the same time is a mix of emotions very difficult to deal with. I am sorry that I never knew your soldier personally, but none of these courageous men and women will be forgotten. They will never be able to be replaced, but sometime, someday your loving memories will help to sustain you. This courageous soldier will forever now be your Angel watching over you all for the rest of your lives. It's what brings me some measure of peace and comfort and I hope it will you as well. To his family and friends in pain, I offer this comfort: When you find yourself in that dark sorrowful place, think not only of how you will miss him, but instead recall the years, days, hours and minutes gifted to you by his presence. The one thing that cannot be taken from you is those wonderful memories that now will mean more than ever. If you ever want to talk, I'm only an e:mail away and would love for you to tell me more about your Hero. God Bless this courageous soldier and family.
Pam Adams (SFC Brent Adams, KIA 12/1/05 Ramadi, Iraq)
[email protected]
(Millersville, PA )
August 14, 2006
God Bless your family and see you in Paradise. Shipmate, you are relieved of your watch. Bravo Zulu
SK2 (SW/AW) R. Lee
August 12, 2006
Please accept our sympathy for your loss, and our prayers that God provide you peace and comfort. Marc will live on in the hearts of many American families, who recognize his honor and courage and who will be here to support your family with prayer. God Bless.
Lee Sirotnak
August 8, 2006
MAY GOD BLESS YOU AND YOURS. PLEASE ACCEPT MY DEEPEST SYMPATHIES FOR YOUR GREAT LOSS. KNOW THAT THERE ARE PEOPLE OUT HERE WHO DO CARE AND YOUR HERO WILL NEVER BE FORGOTTEN. HOLD TIGHT TO YOUR TREASURED MEMORIES THAT HIS SPECIAL SMILE MAY CONTINUE TO SHINE ON. I PRAY THAT PEACE WILL FIND YOU ALL SOMEDAY. STAY STRONG AND GODSPEED. SEMPER FI

A PROUD MARINE MOM
ROBYN GARSIDE
August 8, 2006
Dear Wife and Family of Marc Lee,
I didn't have the honor to meet your loving warrior, but i feel his lost so deeply in my heart.
My husband died in Afhganistan June 28th,2005 Danny P. Dietz who was also a Seal.
Marc will never be forgoten, he is the definition of a true SEAL....a true warrior.
Life will never be the same without him, but he will be watching over you from above making sure you still feel his love shining from heaven.

With love,
Maria (Patsy) Dietz
August 8, 2006
Please know that I am deeply sorry for your loss.
The price Petty Officer 2nd Class Marc A. Lee and his family paid for this country will NEVER BE FORGOTTEN...
May he Rest well in the Mighty Arms of God and may God's Loving Comfort and Grace be with the Lee family.
I am the sister of such a young hero, who made the Ultimate Sacrifice in Vietnam, many years ago.

"I consider that our present sufferings.
are not worth comparing with the glory
that shall be revealed in us."
Romans 8:18