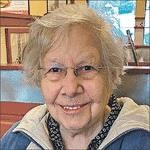 BORN
1932
DIED
2021
FUNERAL HOME
Demaine Funeral Home
5308 Backlick Road
Springfield, VA
HUGHES Mary Hyre Hughes (Age 89) Of Springfield, Virginia, passed away peacefully on Wednesday, September 8, 2021, of natural causes. She was born Mary Catherine Hyre on June 4, 1932 in Petersburg, West Virginia to Eugene E. Hyre and Ina Loretta Bowman, living in the mountains surrounding Petersburg. Her mother passed away when she was 11 years old, and the family moved down to the valley soon after. Her father, Eugene Everly Hyre, passed when she was 16, leaving Mary and her six siblings to be raised by their extended family in Petersburg. She contracted rheumatic fever at 17 years of age, and suffered from St. Vitus Dance, becoming mute for a year as she recuperated. However, she returned to high school, graduated, and then applied to and was accepted into the University of Virginia. She graduated with a Bachelor of Science in Nursing in 1954, and married her husband, Charles. Together, they had three sons: James, David and Mark. Although she came from a small town, perhaps because of her childhood, Mary always adapted easily to change, and was open to new experiences. She accepted every challenge and adventure that life presented to her and persevered through moments of pain and hardship without complaint, while maintaining her ability to enjoy each opportunity that came her way. After marrying, she and Charles lived at Ft. Eustis, Virginia, for two years before moving to Wichita, Kansas. Her husband, an attorney, accepted a position with the Department of Interior in 1960, and her growing family moved to the Trust Territory of the Pacific Islands, where she, Charles and their children lived on Palau and Saipan. While there, she worked as an instructor for the Trust Territory School of Nursing. The family returned to Virginia in 1964 before moving to Kansas City in 1968, and then back to Northern Virginia in 1971. Mary took a position as a nurse and eventually head nurse at the National Orthopedic Hospital in 1978, working there until her retirement in 1998. Mary was a devoted wife of 55 years, a loving mother to her sons, and a steadfast friend to her neighbors and co-workers. She never forgot where she came from, and kept close ties to her brothers, sisters, and relatives in West Virginia, regardless of where life took her. She was not a judgmental person, accepting other's weaknesses and faults while appreciating their strengths, and sharing her time and attention with anyone that needed it. She had a great sense of humor and a wonderful laugh that came easily and sparked laughter in those around her. More than anything, through her own example, she taught the power of patience and positivity in dealing with life's challenges. She seldom if ever complained, but just simply did what needed to be done, usually with a smile. She was trained as a nurse, but this only served to place a label on the person she was throughout her life; caring, attentive, and devoted to those around her. Mary is preceded in death by her husband, Charles, her son David, her brothers Virgil, John, Bruce and Forrest, and her sister Hester. She is survived by her sons James and Mark; her sister Loretta; and her grandchildren Ian, Gabriel and Lea. In lieu of flowers, well-wishers are urged to send donations to the American Cancer Society. Fond memories and expressions of sympathy may be shared for the Hughes family www.demainefunerals.comwww.demainefunerals.com
Published by The Washington Post on Sep. 19, 2021.
To plant trees in memory, please visit the Sympathy Store.
MEMORIAL EVENTS
To offer your sympathy during this difficult time, you can now have memorial trees planted in a National Forest in memory of your loved one.
Funeral services provided by:
Demaine Funeral Home
MAKE A DONATION
Please consider a donation as requested by the family.
MEMORIES & CONDOLENCES
0 Entries
Be the first to post a memory or condolences.