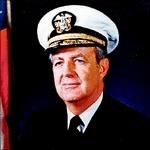 MERTON DICK VAN ORDEN  REAR ADMIRAL, US Navy (Retired)
MERTON DICK VAN ORDEN, Rear Admiral, U.S. Navy (Retired), age 97, died of cancer on December 9, 2018, in Arlington, Virginia. Admiral Van Orden was born in Texas and became a member of the U.S. Naval Academy Class of 1945. He graduated as an Ensign in June, 1944, from the war-time shortened course. He spent the war years aboard the USS Independence in the Pacific and the minesweeper USS Tanager and USS Marquette in the Atlantic and Mediterranean. He received a BS in Electrical Engineering from MIT and an MBA from The George Washington University. He completed the Advanced Management Program at Harvard Business School and was assigned as Commanding Officer of the Naval Electronics Laboratory Center in San Diego. There he was awarded the Legion of Merit medal and selected to the rank of Rear Admiral. He became the Chief of Naval Research where he received a second Legion of Merit medal. Admiral Van Orden retired from the Navy in 1975 and then worked with various research and consulting companies.He is survived by his wife of 74 years, Nancy, their two children, Anne Van Orden Butler (Chris) and Richard Platt Van Orden (Suzanne), five grandchildren, and five great-grandchildren.  Admiral Van Orden's life will be remembered at a Memorial Service at the Naval Academy Chapel in January 2019, followed by interment at the Naval Academy Columbarium. In lieu of flowers, donations to St. Dunstan's Episcopal Church, 1830 Kirby Road, McLean, VA 22101 would be appreciated.
To plant trees in memory, please visit our Sympathy Store.
Published by The Washington Post on Dec. 13, 2018.
MEMORIAL EVENTS
No memorial events are currently scheduled.
To offer your sympathy during this difficult time, you can now have memorial trees planted in a National Forest in memory of your loved one.
MAKE A DONATION
MEMORIES & CONDOLENCES
1 Entry
Though we never met Big Brother Dick in person, we came to know him through his sister Amanda. He was large in spirit and interested in all things great or small. He was a gifted communicator. Our thoughts and prayers go out to Dick's family as they heal. Respectfully...
Karen & Rick Burden
December 14, 2018
Showing 1 - 1 of 1 results