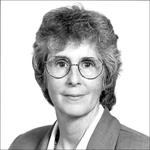 BORN
1929
DIED
2019
PATRICIA MEYER BATTIN
Died on April 22, 2019 at the age of 89. She was born on June 2,1929 in Gettysburg, PA, the daughter of Emanuel Albert and Josephine (Lehman) Meyer. She attended Sidwell Friends High School in Washington, DC, graduated from Swarthmore College in 1951. Her marriage to William Thomas Battin ended in divorce in 1974. She is survived by her brother Nicholas Meyer (wife Barbara), her children Laura Battin Geradine (husband Paul), Joanna Brigham (husband Craig), and Thomas Meyer Battin, her granddaughters Katherine Geradine, Roseanne Geradine, Alice Geradine, grandson Beau Brigham, four nieces and two nephews. She had a long career in libraries beginning at SUNY Binghamton while earning a master's degree in Library and Information Science from Syracuse University in 1967. In 1974, she was recruited to Columbia University as the Director of Library Services and became a vice president in 1978. In 1987, she moved to DC to lead the Commission on Preservation and Access. Her work there led to being awarded the National Endowment for the Humanities medal by President Clinton in 1999. After retiring from the Commission in 1994, Pat led the three-year Virtual Library Project at Emory University. She served on the Board of Trustees of Lehigh University. She received the honorary Doctor of Humane Letters from Emory University in 1993, Lehigh University in 1990, and Syracuse in 2000. Contributions in her memory may be made to the Patricia M. Battin Scholarship fund, a project of the Council on Library and Information Resources (CLIR), 2221 S Clark St, Arlington, VA 22202. Please make checks out to CLIR with the memo "Patricia Battin Scholarship Fund". A Celebration of Life Service will be held at The Collington Community, 10450 Lottsford Rd., Mitchellville, MD on Sunday, June 2 at 2 p.m. in the auditorium. For more information, contact Tom Battin at [email protected]
Published by The Washington Post on May 19, 2019.
To plant trees in memory, please visit the Sympathy Store.
MEMORIAL EVENTS
Jun
2
Service
2:00p.m.
The Collington Community
10450 Lottsford Rd., Mitchellville, MD
MAKE A DONATION
MEMORIES & CONDOLENCES
4 Entries
Allow your cherished memories of Patricia to live on bringing you comfort. Wait on God to erase the effects of sin and death, making eternal life in paradise possible.
May 21, 2019
TO THE FAMILY: Although I did not know Patricia, I just wanted to tell family and friends how sorry I am for their loss, please accept my deepest sympathy. Please know that your family will be in my prayers 2nd Corinthians 1:3,4
S Lewis
May 19, 2019
My sympathies to Pat's family upon their loss. It was a great pleasure to have been a colleague of hers.
Sue Martin
May 19, 2019
To the Battin Family: My heartfelt sympathies go out to the family and friends during this difficult time. I hope that the promise in 1 Thessalonians 4:14 can bring comfort. Knowing that there's a hope for the ones we have lost in death can be so reassuring.
May 19, 2019
Showing 1 - 4 of 4 results