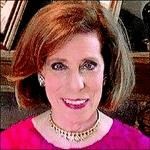 FUNERAL HOME
Sagel Bloomfield Danzansky Goldberg Funeral Care, Inc.
1091 Rockville Pike
Rockville, MD
SAGON PATRICIA B. SAGON
A longtime journalist, world traveler, and style connoisseur who embraced classical music and the arts as both a passion and a philanthropic cause, passed away November 3, 2020 from cancer at the age of 70.

Patricia was a true Washingtonian, born and raised in a city that she called home for most of her life. She savored all of the capital's museums and cultural touchstones, from her attendance as a teenager to the Beatles' first American concert in Washington in 1964 to her involvement with the National Symphony Orchestra, where she served on the board for 25 years.

A graduate of Northwestern University's Medill School of Journalism, Patricia was an astute observer of the world around her with a natural curiosity. Patricia worked for years as a journalist in both print and television, including stints at the Wall Street Journal, WMAQ in Chicago, and WPLG in Miami, during which she interviewed Pope John Paul II in Nassau, Bahamas.

Her final position was also her most prominent, as the White House correspondent for the Westinghouse Broadcast Company in Washington in the 1980s, where she interviewed President Reagan and Princess Diana, among others. Patricia spent her entire life as an ardent consumer of the news. Daily, she would read the Washington Post, NY Times, and the Wall Street journal. Late at night she listened to the BBC and NPR. She championed good writing and speaking. One of her favorite tee shirts read "I am silently correcting your grammar." And she was. Just not always silently. For years, she mailed her close friends news clippings until recently when she finally gave in and mastered email and emojis.

Patricia also brought her keen sense of style and fashion to her work, known as being the best-dressed journalist at many a Washington press stakeout. She always exuded grace, and she loved dressing up to go out on the town, bemoaning the lowering of dress codes and the absence of table cloths at many fine restaurants. There was truly nothing casual about Patricia.

Patricia was an inveterate reader and lifelong learner. She enrolled in Sotheby's classes and became knowledgeable about porcelains and other decorative arts. Her passion for the decorative arts culminated in using all her knowledge and taste in creating her ultimate home.

After she retired from journalism, she committed herself headlong to supporting cultural, educational, and health organizations in Washington. She was a master in organizing gala fund-raising events for The Octagon House, the Phillips Museum, Choral Arts Society of Washington and the National Symphony Orchestra, among others, and she created an endowment for the Washington Hospital Center's new Heart and Vascular Institute. She also served on many boards, such as the National Cathedral School, WETA, the Phillips Museum, and the Choral Arts Society.

But it was the National Symphony Orchestra that she considered her most prized endeavor. Her long involvement and support for the NSO allowed her to pursue her passions for both classical music and world travel, as she accompanied the orchestra on national and international tours and traveled most recently to Vienna with the Kennedy Center International Committee for the Arts. This spring, she made a special gift to NSO to help it through the pandemic. Gary Ginstling, NSO Executive Director said, "Patricia shared her expertise and guidance generously as a Board member, traveled often with the Orchestra, and helped lead the NSO to the success it has found over the years. Above all else, she was a steadfast champion for our Orchestra and for classical music in our city."

In her travels, Patricia loved nothing better than lingering at a museum in London or Paris, spending hours studying each exhibit and reading every descriptive plaque. Her world travels took her to every corner of the globe, from penguin-sightings in the Arctic, to breakfasts with giraffes in Kenya, tenting in the desert of the United Arab Emirates and earlier this past spring, braving the midnight subarctic temperatures to view the Northern Lights in Churchill, Manitoba.

Patricia was the single child of Philip Sagon, a lawyer and real estate developer in Washington, and Martha (Silverstein) Sagon, a social worker and philanthropist. Patricia was a loving and doting child to her mother who lived well into her late 90's.

While having no children of her own, she was known as aunt Patricia to over dozens of children and grandchildren of her friends on whom she always generously doted. She will be missed by all those now adult children who loved having her as a part of their lives. She leaves a chasm in the lives of her many friends - who will not be getting their birthday or anniversary cards in the mail - and especially in the life of her constant companion of 35 years, Charles Miller.

Patricia was a lifelong member of the Washington Hebrew congregation.

Published by The Washington Post on Nov. 16, 2020.
To plant trees in memory, please visit the Sympathy Store.
MEMORIAL EVENTS
To offer your sympathy during this difficult time, you can now have memorial trees planted in a National Forest in memory of your loved one.
Funeral services provided by:
Sagel Bloomfield Danzansky Goldberg Funeral Care, Inc.
MAKE A DONATION
MEMORIES & CONDOLENCES
2 Entries
I just recently heard of Patti’s death. My in-laws were friendly with her phone . I remember Pat as so lovely. I would see her often at The Kennedy Center concerts and I remember her also as a reporter. My heartfelt sympathy to Charles Miller. Gerrie Dubit
Gerrie Dubit
Acquaintance
January 21, 2021
Please except my deepest sympathies to you and your family at this time of grieving. May God be with you and your family in this time of sorrow.
Simone Taylor
November 22, 2020
Showing 1 - 2 of 2 results