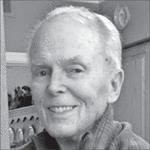 FUNERAL HOME
Simple Tribute Funeral & Cremation Center
1040 ROCKVILLE PIKE
Rockville, MD
Richard King Thomas (age 90)
Rich Thomas passed away on May 15, 2021 at the home of his long-time partner in Bethesda, MD. Before that, he had lived in Potomac, MD for over fifty years with his wife and children after moving from New York City in 1970. Rich was born in Detroit, MI to Charles Roy Thomas and Nellie Davis Thomas, where he attended Redford High School, and later graduated from the University of Michigan. After serving in the U.S. Army, he launched his journalism career with the Associated Press and New York Post before starting as a business reporter at Newsweek in its New York bureau in 1963. He worked as Chief Economic Correspondent for Newsweek until his retirement in 2007. He met his future wife, Sigrid Maria Stella Thomas, in Germany during his Army career in the 1950s. After her immigration to the United States, they married in 1956. She predeceased him in 2007. Rich had a keen passion and memory for history, world political events and U.S. economic policy. He wove his acquired knowledge of facts and figures - both broad and minute - into theories and views of our country often departing from conventional wisdom. He was rarely without an opinion to share to the delight of some and dismay of others. Rich spent most of his recent summers in Northport, MI, where he enjoyed connecting with relatives old and young, childhood friends, and local residents - his front deck a way station for conversation. Rich is survived by his partner, Judith Webster, and children Karina Thomas and Stryk Thomas. A private celebration of life will be held at a later date.
Published by The Washington Post on May 30, 2021.
To plant trees in memory, please visit the Sympathy Store.
MEMORIAL EVENTS
To offer your sympathy during this difficult time, you can now have memorial trees planted in a National Forest in memory of your loved one.
Funeral services provided by:
Simple Tribute Funeral & Cremation Center
MAKE A DONATION
MEMORIES & CONDOLENCES
0 Entries
Be the first to post a memory or condolences.