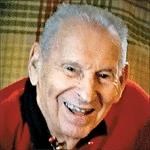 BORN
1922
DIED
2021
FUNERAL HOME
Donald V. Borgwardt Funeral Home, P.A.
4400 Powder Mill Rd.
Beltsville, MD
BIRO RUDOLPH BIRO "Rudy" On Sunday, September 5, 2021. Dad passed away peacefully at home. He was 99 years old and a lifelong Washingtonian, born at Walter Reed hospital on July 12th, 1922. Rudy grew up exploring the Potomac River with his twin brother John in Anacostia. They ventured to the river and watch the Navy's ships heading to and from the DC Navy Yard. He attended Anacostia High School where he lettered in football and played for the golf team. Rudy joined the Naval Reserves at the age of 17 and is a World War II veteran. He served in the Atlantic and Pacific before marrying his wife Peggy-Du at St Francis Xavier Catholic Church on October 18, 1947. Rudy was a Plank Owner and Chief Gunner's Mate on the sub hunter and Destroyer Escort, the USS Stewart, DE 238; now a museum in Galveston, TX. Rudy joined the DC Metropolitan Police in 1946, starting as a foot patrolman and retiring as a (Detective) Lieutenant 26 years later. He served for many years in the Juvenile Division and with The Boys and Girls Clubs of Washington, DC. After retiring from MPDC Rudy worked for NCR Corporation, and for MD National Capital Park & Planning. Peggy and Rudy moved from Wheaton, MD to Ful ton, MD where they raised their youngest daughter Donna, tended their garden and were active members of St. Louis Church. Rudy loved spending time with his wife and five children, fishing and crabbing the Chesapeake Bay, exploring Skyline Drive, and golfing at Northwest Park. There were endless barbeques in our back yard, with rounds of tether ball, croque, badminton and back yard gymnastics. He taught us how to clean fish, pick crabs and shuck oysters. We spent summer vacations yearly at Kill Devil Hills, NC where we rode the waves on rafts, sledded down the Sand Dunes, climbed the Hatteras Light House, and crabbed the back waters of the bays. At night dad would light a bonfire on the beach and we would sit on driftwood logs, under the stars, roasting marshmallows. Our thanks to his wonderful caretakers, Mary Ellen, Eunice, Rebecca and Elizabeth. May God Bless them as they ensured he was able to spend his final days in the place he loved so much, his home. Rudy is survived by his son Richard Biro of Daytona Beach, FL; three daughters and their husbands Margie (David) Young of Naples, FL, Joanie (Joe) Rosati of Solomon's, MD, and Donna (Jim) Beck of Mt Airy, MD; two grandsons Andrew Biro of Honolulu, HI and Richard Carlton Smallwood III (Sarah) who is serving in the Navy in Oak Harbor, WA. Rudy was predeceased by his wife Margaret Dulaney Biro (Peggy Du); his daughter Barbara Ann (Biro) Smallwood, his parents Marie and Rudolph Biro, twin brother John Biro and sister Mary Ebner. A celebration of Rudy's life, and Funeral Mass will be held at a future time and date. Rudy and Peggy will be laid to rest together at Arlington National Cemetery. In lieu of flowers please donate to the Galveston Naval Museum. www.galvestonnavalmuseum.comwww.galvestonnavalmuseum.com
Published by The Washington Post from Oct. 23 to Oct. 25, 2021.
MEMORIAL EVENTS
Funeral services provided by:
Donald V. Borgwardt Funeral Home, P.A.
MAKE A DONATION
MEMORIES & CONDOLENCES
1 Entry
May your hearts soon be filled with wonderful memories of joyful times together as you celebrate a life well lived.
Jones family
Other
October 23, 2021
Showing 1 - 1 of 1 results