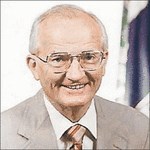 PARTRIDGE William Russell Partridge William R. Partridge, age 94, beloved father and grandfather, passed away peacefully while reading on October 6, 2021 at Riderwood Village, Silver Spring, MD. In recent years as his health declined he never lost his ability to read and always had a book in his lap, often reading aloud to the other residents. A lifelong scholar, he shared his love of reading with everyone he met. His colleagues in Washington jokingly referred to his office as "the branch library." He was born and raised in Southern California. He graduated from Alhambra High School in 1944 at the age of 17 and enrolled in Engineering School while he awaited his 18th birthday so he could join the Army. When the war ended, he enrolled in Pomona College. There he met the love of his life, Phyllis, and married her in 1949. He received a Bachelor's degree in Government and Economics from Pomona in 1949 and a Master's Degree of Public Administration from The Maxwell Graduate School of Citizenship and Public Affairs at Syracuse University in 1951. His early career was at the U.S. Atomic Energy Commission in Oak Ridge, TN, where Holly and Mark were born. In order to raise his children near family, he returned to Pacific Palisades, CA in 1955 where he had a career as a management consultant. He obtained an M.B.A. at UCLA School of Business in 1963, Having lost both his parents while he was in his thirties, Bill became devoted to pursing a healthy lifestyle and inspired his children and grandchildren. As a sailer, surfer, golfer, and snow-skier, Bill was as enthusiastic about his hobbies as he was his work and the best memories of childhood are beach and ski vacations with him, the kind and patient teacher. In 1975 Bill and Phyllis moved to Annapolis, MD and for the next twenty years he commuted into DC, serving in several senior executive positions including Assistant Inspector General at the Department of Energy and Deputy Inspector General of FEMA. He retired from government in 1995. In 1991 he received a Certificate of Recognition from the Secretary of Defense "in recognition of your service during the period of the Cold War (September 2,1945 - December 26,1991) in promoting peace and stability for this Nation, the people of this Nation are forever grateful." He was preceded in death by his wife, Phyllis Squires Partridge, who died of Covid-19 in 2020. He is survived by his daughter, Holly (Lucian Wayne) Beavers, Nashville, TN son, Mark Partridge, Ocean Pines, MD, step-son, W.M. Partridge, Palm Springs, CA and numerous grandchildren. He will be buried in the family plot in Claremont, California at a private service. He will be buried in the family plot in Claremont, California at a private service.
Published by The Washington Post on Oct. 17, 2021.
To plant trees in memory, please visit the Sympathy Store.
MEMORIAL EVENTS
To offer your sympathy during this difficult time, you can now have memorial trees planted in a National Forest in memory of your loved one.
MAKE A DONATION
MEMORIES & CONDOLENCES
1 Entry
RIP Bill.
Frank Titus
Friend
October 18, 2021
Showing 1 - 1 of 1 results