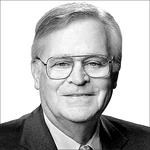 BORN
1939
DIED
2020
THOMAS William Griffith Thomas Of Irvington, VA and Livingston, MT, died of heart failure on January 23, 2020. He was born on November 1, 1939 in Washington, DC. He is predeceased by his parents, Henry Phineas Thomas and Margaret Carr Robertson; and his brother, Henry Alexander Thomas. He graduated from Randolph-Macon Academy, attended Williams College and Richmond College, and received his J.D. degree from the University of Richmond Law School. He was married to the love of his life, Suzanne Campbell Foster, in 1960. After graduating from Law School, the couple moved to Alexandria, VA where he opened his own law office. He was a founding partner of Thomas, Kent, Haddock, & Sewell, in 1970 which evolved over the years to Hazel & Thomas, which merged with Reed Smith, LLP in 1999. He continued to practice law with Reed Smith, LLP, primarily in Richmond, VA until his retirement in 2018. Much of his practice was devoted to representing clients before the Virginia General Assembly and Virginia governmental agencies. He was an active member of the Episcopal Church and served his church in many ways including: Senior Warden of St. Paul's, Alexandria; President of the St. Paul's Alexandria Foundation; and as a vestry member of St. Paul's, Millers Tavern. He was active in politics for much of his life. In 1968 he was appointed Secretary of the Virginia Democratic Party and in 1970 was elected Chairman of the Virginia Democratic Party. He was a close advisor to both Governor Charles S. Robb and Governor Gerald L. Baliles during both their campaigns and terms in office. During his life he served on a variety of professional civic, educational and corporate boards and commissions including: The Uniform Law Commission; The American Law Institute; The American College of Real Estate Lawyers; as a fellow of The Virginia Bar Association; Virginia State University; the University of Richmond; the Virginia Museum of Fine Arts; the Center for Innovative Technology; the Washington Metropolitan Airports Authority; the Federal City Council of Washington; Virginia Electric & Power Company (now Dominion Energy); and Perpetual Savings Bank. He loved his family and friends and enjoyed duck hunting, shooting in England, golfing and fly fishing with all of them. He was a member of many clubs including at his death, the Commonwealth Club of Richmond, the Metropolitan Club of Washington, DC, and Burning Tree Club in Bethesda, MD. He is survived by his wife of 59 years, Suzanne Foster Thomas; his two sons, William Griffith Thomas, III (Heather) and Alexander Young Thomas (Brigid); and his daughter Margaret Campbell Thomas Konkel (Brian); five grandchildren, Caroline Margaret Thomas, Sarah Lamont Thomas, Liam Alexander Thomas, William Guy Thomas, and Jane Alexander Thomas; and many nieces and nephews. A memorial service will be held at St. Paul's Episcopal Church, 228 South Pitt Street, Alexandria, VA 22314, on Wednesday, February 19, 2020, at 2 p.m. In lieu of flowers, memorial gifts may be made to Randolph-Macon Academy, Front Royal, VA or the University of Richmond, Richmond, VA.
Published by The Washington Post from Jan. 26 to Jan. 28, 2020.
To plant trees in memory, please visit the Sympathy Store.
MEMORIAL EVENTS
Feb
19
Memorial service
2:00p.m.
St. Paul's Episcopal Church
228 South Pitt Street, Alexandria, VA
MAKE A DONATION
MEMORIES & CONDOLENCES
2 Entries
Dear Suzanne and family,
I am deeply saddened by the news of Bill's passing, for he was the one who introduced me to you all, who have brought great pleasure to my Livingston life! Reading his accomplishments makes it clear: he was an ethical and amazingly prolific force who consistently made a better life for those around him - and how we shall miss him!

My thoughts are speeding to you from Los Angeles, here for my "advising" time, to the Virginia countryside near where I grew up.

I was privileged to serve with Bill on R-MA's board of trustees.

He was a man who possessed both keen business acumen and high moral principles.

I send my condolences to you for your loss.