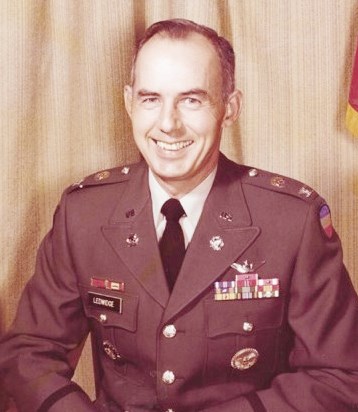 BORN
1932
DIED
2021
Ledwidge, Augustine Thomas Colonel, U.S. Army (Ret.) Age 88 LEDWIDGE, Col (Ret). Augustine "Gus" Thomas, age 88, of Springfield, Va., passed away peacefully surrounded by his family, as he left this temporary home to be with his Savior on June 09, 2021. He was born October 28, 1932, in Providence, Rhode Island to Mr. Augustine T. and Josephine R. Ledwidge. He is survived by his wife of 62 years, Joanne Ledwidge; his daughters Mary Kay Jarrett of Richmond, Va., Beth Shotwell of Eldersburg, Md., and Pam Orsi (Kevin) of Richmond, Va. Also surviving him are his grandchildren: Will Jarrett (Leah), Cate Jarrett, Jack Orsi, Alec Orsi, Gavin Orsi, Alise Shotwell, and Ethan Shotwell who loved their Papaw dearly. After graduating from the University of Rhode Island, Gus had a distinguished and honorable 26-year career in the United States Army including tours in Korea, Germany, and two tours in Vietnam, first as Company Commander, then as a Battalion Commander. He had multiple assignments including a variety of aviation tours flying both fixed wing aircraft and helicopters. He earned an MBA from Syracuse University. He was assigned as a Weapons System Analyst in the Office of the Assistant Vice Chief of Staff of the U.S. Army and was then selected to attend the National War College. Following that, he assumed command of the 7th Transportation Group at Ft. Eustis, Va. His decorations include the Legion of Merit, Air Medal (2nd OLC), Distinguished Flying Cross, Bronze Star, Meritorious Service Medal, Army Commendation Medal and Senior Army Aviator Badge. After his military retirement, he worked in telecommunications for many years and retired from General Electric. Though his career was defined by success, leadership and courage, his true love was his family. His greatest joy was his wife, Joanne, raising their daughters and continuing to be involved in the lives of his children and grandchildren. They will miss him dearly and look forward to seeing him again. A Memorial Service will be held Friday, June 18, 2021 at 1:30pm at Way of Faith Assembly of God, 8800 Arlington Blvd, Fairfax, VA 22031. Burial to follow at a later date at Arlington National Cemetery. In lieu of flowers, contributions may be made to Way of Faith or the Dave Roever Foundation. Please sign the Guestbook at www.legacy.com/washingtontimes
To plant trees in memory, please visit our Sympathy Store.
Published by Washington Times from Jun. 16 to Jun. 17, 2021.
MEMORIAL EVENTS
Jun
18
Memorial service
1:30p.m.
Way of Faith Assembly of God,
8800 Arlington Blvd, Fairfax, VA
MEMORIES & CONDOLENCES
0 Entries
Be the first to post a memory or condolences.