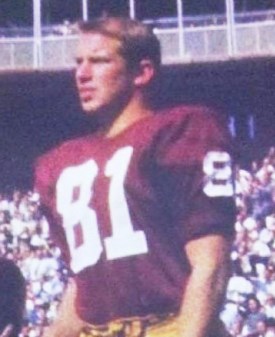 Luce, Llewellyn Attsett Age 81 On Sunday, March 22, 2020, Llewellyn Attsett Luce, loving husband to Mary Lou (Gardner) Luce and father of three children, died at the age of 81. Lew was born on April 3, 1938 in Washington D.C. to Llewellyn and Mayola Luce. He had one brother, John Byrd Luce, RIP 1/5/20. Lew was raised in Washington D.C. and graduated from Woodrow Wilson High School in 1956. In 1959, he married Mary Lou Gardner and they raised three children, Carol, Patrick and Mary Elizabeth. Lew was proclaimed one of the greatest athletes ever to come out of the Washington D.C. area. He was a 3 time All Metropolitan in Basketball as well as All Metropolitan in Football and Baseball. He would later go on to play with the Washington Redskins and also briefly in the Pittsburgh Pirates organization. He was also a renowned Basketball Official at the High School and Collegiate levels. When his playing days were over, Lew became a teacher and coach for over 30 years where he touched the lives of many students and young athletes. His football coaching career began with Florida State with then assistant Bobby Bowden. He would go on to coach basketball, baseball and football at many levels. He is also known for developing Maplewood Boys club in its infancy to a powerhouse in the D.C. area. Lew and Mary Lou would later retire to Apollo Beach, Florida where they both became involved in numerous charitable and community organizations. In Apollo Beach, Lew was instantly recognized by his Green Truck, Baseball Hat and was simply referred to as "Coach". He is survived by his beautiful wife of 61 years, Mary Lou, his 3 children, 6 grandchildren and two great grandchildren. Instead of sending flowers, my dad would have wanted you to donate to your favorite charity or just perform a simple act of kindness. Please sign the Guestbook at www.legacy.com/washingtontimes
Published by Washington Times on Mar. 27, 2020.
To plant trees in memory, please visit the Sympathy Store.
MEMORIAL EVENTS
To offer your sympathy during this difficult time, you can now have memorial trees planted in a National Forest in memory of your loved one.
MAKE A DONATION
Please consider a donation as requested by the family.
MEMORIES & CONDOLENCES
14 Entries
Dear Mary Lou and family, I was so sorry to learn of Lews passing. I am (the late) Billy Harrisons wife, Sophie. I have so many great memories of Lew and Billy together, playing ball and having so many laughs together. He was one of a kind and will be missed. With great sympathy.
Sophie Harrison
Friend
May 15, 2020
I will never foget him as Fred in Seven Little Girls. He was a real trooper and will be missed.
Sam Andelman
Coworker
May 14, 2020
Lew, as we always referred to him when talking about him in school was a great influence on many students at Sherwood. His dynamic personality and gravelly voice have been a fond memory for many years.
Mark Milner
Student
May 14, 2020
Mr. Luce was my mechanical drawing teacher at Sherwood High School. He had a great personality and I always looked forward to his class. His way of teaching helped me excel in drafting while also keeping a smile on my face. He will be missed!
Kevin White
Student
May 14, 2020
Coach and Mary Lou can't be thanked enough for all they did for the community. He never asked for anything in return but a smile and good wishes. He will be missed by many!
Lee Calvin
April 18, 2020
Our family sends deepest sympathies to the Luce Family. We knew Coach Luce for a few years at Brandon High School where my Brothers Don and David McNish we're coached and played under his leadership. Additionally my husband Michael Dawson was tutored in place kicking by Coach Luce.
The main attributes we recall of Coach Luce was his big personality and fun loving attitude towards life and football. Although our contact with him was very short in time his life greatly influenced us over the years. His name came up frequently in family get togethers. Especially the time my father, Donald McNish and brother Don helped his family move back to the D.C. area in 1966.

The Michael Dawson and McNish Family
THer
April 13, 2020
Coach will always have a special place in the heart of East Bay High School. For many years, he helped the athletic teams, the agriculture department and the FFA chapter. He had such an amazing presence and made a positive impact on everyone he met. We were always happy to see him pull up in his little green truck or to see him out and about in Apollo Beach.

May all of his family and friends find comfort in the fact that he left this world a better place and he will be missed by all.

We miss you Coach! Your family will be in our thoughts and prayers.
Kim Willis
April 10, 2020
lewy was one of the great characters in the delmarva! ive coached in moco for 42 years.everybody tells lewy luce stories.his reffing stories are hall of fame! "you dont know who your messing with! im lewy luce" he was my ad at wootton hs he reffed my basketball games when i coached and he was my friend .i love lewy luce. i will tell his stories ttil the day i see him again in heaven.when i get there im sure he will have some new ones to tell!!! see you soon lew
John Fahrner
Coworker
April 9, 2020
The most christian man I've ever met. When you were in Lew's company all you heard was laughter.
April 5, 2020
"No practice today...see you in church on Sunday!" Love & miss him! The BLVD won't be the same!!
Walt & Sharon Keaton
April 2, 2020
"No practice today!" Many, many fond memories. We have lost a good friend that will be greatly missed but always remembered. I searched for some of the pictures from Jamaica but couldn't find them. Oh what a time we had. Much love to the family and may God stand by your side in this time of need.
Tom & Ann Folliard
March 29, 2020
I played football and basketball for Coach Luce in 68/69 at Bullis. I always looked forward to practice with Lew. His love of the game (both games) was clear and obvious, and I loved to hear his stories

A friend of mine who was at Bullis at the same time I was told me of Lew's passing on Wednesday morning, and for the rest of the day we were constantly texting, emailing and calling each other with stories and memories of Coach Luce...some truly hilarious stuff.

He was fun and he was memorable, and in the final analysis, that's a pretty damn good legacy.

John Solberg
Bullis '70
John Solberg
March 27, 2020
I knew Lew from our days in junior high school where I watched him play basketball and quickly realized he had amazing talent. Football in high school brought us together on the team that had a lot of success. He was an amazing player and a memorable person. Rest in peace
Robert Russell
March 27, 2020
I remember Mr. Luce as he was a teacher for my drafting class at Sligo Junior High School. We would sit and talk about the Redskins and he was friends with my uncle, Jack George. I remember getting a demerit for giving him a piece of game at a basketball game. I was a cheerleader and we were not allowed to chew gum. Great guy and I am so sorry for your loss.