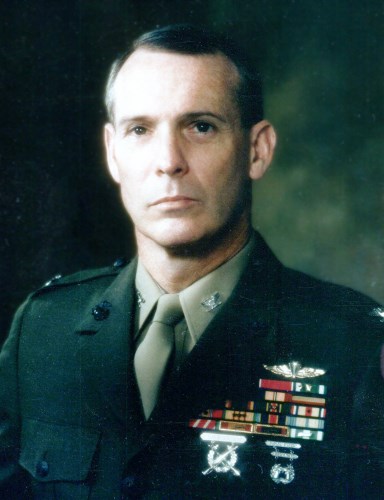 Joe Traurig
Coworker
June 8, 2021
I met Hays at the US Army Jag School in Charlottesville, VA,
and worked in the Pentagon when he was serving there in International Law in the Office of the Army Judge Advocate General. He was a pleasure to know and was widely admired. Please accept my regrets at his passing.
John Nichols
Served In Military Together
June 2, 2021
A Marine's Marine -
"He only in a gentle honest thought
And common good to all made one of them.
His life was gentle and the elements
So mixed in him that nature might stand up
And say to all the world "this was a man."
William Shakespeare - Julius Caesar
R.T. Maguire
Served In Military Together
May 31, 2021
Knowing his son Doug and what a fine man he is, we send our condolences to the entire family.
Susan Gravely
Acquaintance
May 31, 2021
Colonel Hays Parks was a great American and a great Marine. This country and the U.S. Marine Corps will sorely miss him
Thomas Flaherty
Served In Military Together
May 30, 2021
I worked with Hayes on many occasions and in many different situations over many years. He was always the consummate professional. All of those who practiced law in the national security arena learned from and will miss Hayes.

Hayes, thank you and your family for your service to our nation.

Very respectfully, RADM Michael Lohr, JAGC, USN (Ret)
May 30, 2021
He was a valued friend and colleague, one of the gang at Navy JAG Code 10 (International Law). He not only knew what he was doing, he was one of those who made that office such an enjoyable and professionally satisfying place to work. God rest his soul!
CAPT Frank B. Swayze, JAGC, USN (Ret.)
Friend
May 30, 2021
I will miss this good friend of over 40 years. A consummate professional whether by lecture or the written word, he was a Mentor's Mentor who impacted positively two generations of military and civilian lawyers, both is the US and abroad. I owe him a great deal as he was instrumental in my career by advising me on assignments and professional opportunities. He had a remarkable and delightful sense of humor that continued even as his health deteriorated.

Til’ the last landings made
And we stand unafraid
On a shore that no mortal has seen;
Til’ the last bugle call
Sounds taps for us all
It’s Semper Fidelis. Marine!

Semper Fidelis old friend. I am looking forward to sharing some hot chow on the High Ground when we next meet.
Col William T. Anderson USMC (Ret.)
Served In Military Together
May 29, 2021
Hays was a Marine's Marine Attorney, and treated all he met with respect.
I knew him in the Pentagon when I was serving as Associate General Counsel of Army and he was advising the Marine Corps, and every interaction socially and professionally was a tribute to this All American Gentleman. It was an honor to serve together with him on many InterService projects that proved his dedication to God, Country and the Marines. A real man among men. He will be missed by all who knew him.
DENNIS DEAN KIRK, ESQ.
Friend
May 28, 2021
I first met Hays when he spoke at one of my college history classes - he was close friends with the professor. She introduced me to him as someone that was due to be commissioned in the USMC after graduation, and he immediately took an interest in me, sending me books while I was on deployment and attending my graduation from the infantry officer course; we saw each other periodically over the years and I was able to attend his retirement ceremont from the Pentagon. He was also good friends with my father, with whom he had worked professionally as a government lawyer. There's not much to say beyond the obituary - what an incredible American life Hays led. We are all fortunate as Americans that he did so much, and those of us that were lucky enough to know him personally benefitted even more so.

Semper Fi Hays - you will be missed, but your legacy will live on in the many people and issues you influenced.
Sam Williamson
Served In Military Together
May 28, 2021
Showing 1 - 12 of 12 results