Robert Moulton, sports writer for the Wausau Daily Herald during the 1960s, died at his home in Newhall, California, on February 29, 2016, at age eighty after several months of declining health. He is survived by his children, Kimberly, Diane, Collin Reade and Tara. His sister, Sally Schenck, a former resident of Wausau, Wisconsin and member of the Wausau Unitarian Universalist Church resides in Palm Harbor, Florida.

Mr. Moulton leaves many friends throughout the United States after a successful career in journalism and as public relations manager of Honeywell Corporation in Minneapolis, Minnesota. He was the author of several books, his first, "First to Fly," a non-fiction account of animals journeying into outer space as well as subsequent fictional books relating to farm life in Wisconsin and a memoir, entitled, "Loss," as he grieved for a lost love.

In 1950's Mr. Mouton served overseas as an enlisted man during the Korean conflict and was awarded for his contributions to the army's Stars and Stripes information service.


Published by Wausau Daily Herald on Mar. 4, 2016.
To plant trees in memory, please visit our Sympathy Store.
MEMORIAL EVENTS
To offer your sympathy during this difficult time, you can now have memorial trees planted in a National Forest in memory of your loved one.
MAKE A DONATION
MEMORIES & CONDOLENCES
Sponsored by the Wausau Daily Herald.
3 Entries
Almost a year too late, I offer my sincere condolences. I knew Bob and Sally in the 70's and 80's in Minneapolis. Bob was a client at a recording studio where I was engineer. We soon became great friends. I know when Sally passed it was really tough on Bob. It was shortly after that that we lost contact. A decade or more later, I had been widowed, was retired, and was volunteering at the VA Med Center in Minneapolis. It was there that I reconnected with Bob. It was great to find a dear friend again. One fond memory was taking Bob and his Dad (Reed?) for a ride in my houseboat on the Mississippi. I remember Bob telling me about when his dad cut his own hair, probably without a mirror.
I lost track of Bob when he moved to CA from Minneapolis but every once in a while I'd look for him on-line. Sadly, I found him today.
God-Speed Bob.
Jerry Stenstadvold
[email protected]
Jerry Stenstadvold
February 6, 2017
Thank you to Bob Moulton who through ACT Advertising, hired Randy to build trade show displays and Dee to sell ads for the bus and for the boat show.
Believing in and helping to support neighbors when they needed. Remembering the man with a large heart and a hearty laugh. Blessings and the comfort of loving memories to his family. Bob made a difference in our lives and we are grateful.
Dee Erlandson
March 6, 2016 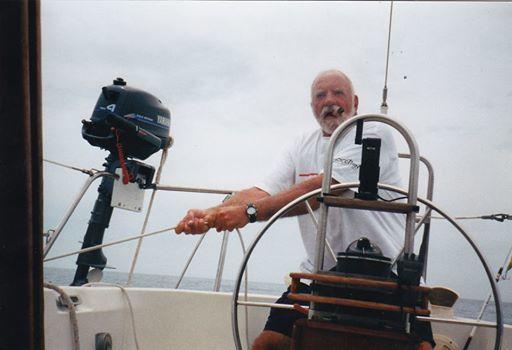