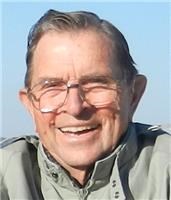 BORN
1929
DIED
2021
Dr. Glen E. Hurley of Courtland, Minnesota, and formerly of Waverly, died on Fathers' Day, June 20, 2021. Glen was born January 13, 1929, to Claude E. and Lorene W. Hurley in a farmhouse near Brownstown, Indiana. He attended Brownstown Township School and graduated Brownstown High School in 1947. He attended Purdue University and then transferred to Kansas State College (University) in Manhattan. Glen graduated from KSU as Dr. Glen E. Hurley, Doctor of Veterinary Medicine in 1953. At Kansas State he met Lois I. Engel from Peck, Kansas. Lois and Glen married September 21, 1953.

Glen was with the Veterinary Reserved Officers' Training Corps (ROTC) and after graduation he was called to service as the base veterinarian at Bolling Air Force Base in Washington, D.C. Among his duties included chaperoning Enos – the first American to orbit the earth in space – on a national talk show. Enos was a chimpanzee. Daughter Sharon Ilene was born in 1955.

Glen then went to work in a large animal veterinary practice in Ellsworth, Minnesota. In 1956 he opened his own veterinary practice in Boxholm, Iowa. Though mostly a large animal practice, he healed everything from cats to cows and even diagnosed the occasional human. Daughter Shawn Elaine and son Eric Glen were born. Glen and Lois fostered Deanne, David, and Darin Mills. Glen was an active leader in the Boxholm Methodist (later United Methodist) church where he co-lead the youth group with Lois. He was on the Grand Community School Board, the Boxholm City Council, and was a Boy Scout leader. He and Lois also managed a small farm with Shorty Peterson.

In 1975 with Sharon in the Veterinarian program at Iowa State and Shawn about to enter University of Iowa, eventually to become a Registered Nurse, the family moved to Waverly, Iowa. Glen joined the Waverly Veterinary Clinic and Lois became the Guidance Counselor at Waterloo Columbus High School. They joined Trinity United Methodist Church. They took leadership roles in the church, Habitat for Humanity, and the Northeast Iowa Regional Housing Authority. They volunteered extensively with The Heifer Project for over 35 years – a special project for them – and were hosts at their regional centers, The Ranch in Arkansas and Overlook Farm in Massachusetts. Eric became a Soil Scientist and Agronomist.

Glen and Lois "retired" and joined the United States Peace Corps, entering into service in Morocco in 1991. They felt very welcomed by the Muslim community of Rich, Morocco, where they lived and have continued to stay in contact with them through the years. Glen trained veterinary technicians, taught animal husbandry, and provided animal care. They joined the Christian Veterinary Mission and spent several months in Kenya assessing, buying and distributing goats to help people re-establish their herds lost to drought. They spent a cold winter in Ulaanbaater, Mongolia, operating a clinic designed to provide local veterinary students the opportunity for practical experience prior to going out on their own. They trained El Salvadorian farmers and technicians along with Peace Corps volunteers. They worked with Self Help of Waverly in Ghana and were involved with the Iowa United Methodist Church mission programs in Jamaica, Guatemala, Granada, St. Vincent, and Costa Rica as well as various locations in the U.S. including Puerto Rico. Not bad for a couple of depression era farm kids from Indiana and Kansas.

To sign the online guestbook or send condolences to his family, please visit: MVFH.org. Please send any memorials in Glen E. Hurley's name to Heifer Project International or donor's choice.
To plant trees in memory, please visit our Sympathy Store.
Published by Waverly Democrat on Jun. 23, 2021.
MEMORIAL EVENTS
No memorial events are currently scheduled.
To offer your sympathy during this difficult time, you can now have memorial trees planted in a National Forest in memory of your loved one.
MEMORIES & CONDOLENCES
0 Entries
Be the first to post a memory or condolences.