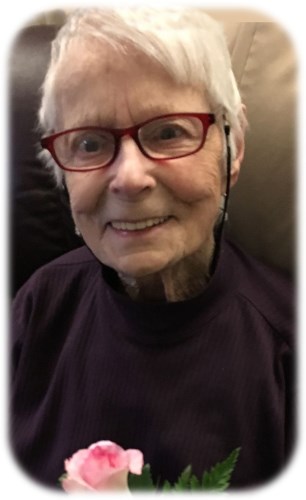 Eleanore June Stark, age 95, passed away Thurs., Jan. 21, 2021 of natural causes at the Jennie Edmundson Hospital in Council Bluffs. Eleanore was born the daughter of Theodore and Mable (West) Castle in Waterloo on Nov. 30, 1925. When she was six months old, she moved with her family to Geneva, IL where she grew up.

She married Eugene C. Stark on Dec. 16, 1942 at Sheppard Field Air Force Base in Wichita Falls, TX. After WWII, they moved to Evansdale and in 1979 to Cedar Falls. Since 2009, she has made her home with her daughter, Ann. She worked for Eagle Food Stores from 1956 until she retired in 1986. She enjoyed traveling, often visiting her sister in Colorado, as well as other western states with her family. Even in her later years, she took a trip to Alaska with her daughter, Ann, and traveled to Boston and Florida to see her granddaughters. She stayed active by riding her bike on the Cedar Falls trails and swimming for many years. Eleanore treasured the time she spent with her grandchildren, who were born over the span of 25 years, and great-grandchildren.

Preceded in death by her husband, Eugene in 1991; sister, Lucille Millett in 2002; & grandson, Dalton Eugene YoungBear in 2013. Private family services will be held. Burial in Garden of Memories.

Condolences may be left at www.KearnsFuneralService.com.

To plant trees in memory, please visit our Sympathy Store.
Published by Waterloo-Cedar Falls Courier on Jan. 24, 2021.
MEMORIAL EVENTS
No memorial events are currently scheduled.
To offer your sympathy during this difficult time, you can now have memorial trees planted in a National Forest in memory of your loved one.
Funeral services provided by:
Kearns Funeral Service
GUEST BOOK
0 Entries
Be the first to post a memory or condolences.