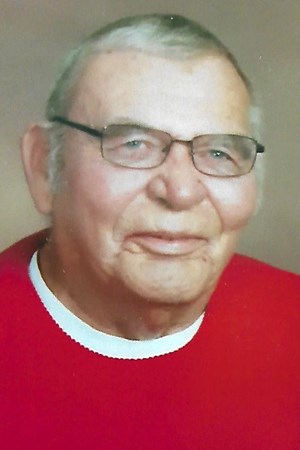 George L. Vopelak Jr, 78, of La Porte City, passed away on Tuesday, September 21, 2021. A visitation will be held on Saturday, September 25, 2021, 9:00-10:15am, at the Trinity Lutheran Church in Vinton. A funeral service will immediately follow with military rites conducted by Dysart American Legion Post #335. The use of facemasks is recommended at the church.

George was born on October 18, 1942 in Vinton, the son of George Sr and Margaret (Bunz) Vopelak. He graduated from Dysart High School in 1961. He was married to Sharon Flickinger in 1965 and they later divorced. He was united in marriage to Teresa (Terri) Flickinger Volante on March 3, 1990. George was a longtime member of Trinity Lutheran Church, American Legion Post #335 in Dysart, and the La Porte City FFA Museum Board. George enjoyed building wooden farm buildings for children and collecting toy farm tractors. He was a retired farmer and was employed by Theisen's Inc., Adam Happel and Remington Seed.

George was preceded in death by his parents and father and mother-in-law, Harold and Bernita Flickinger.

In lieu of flowers, memorial donations may be directed to the family for designation to Cedar Valley Hospice, Trinity Lutheran Church, and the Friends of the (FFA) Museum.

Online condolences are welcome at www.iowacremation.com under obituaries.

Published by Waterloo-Cedar Falls Courier on Sep. 24, 2021.
To plant trees in memory, please visit the Sympathy Store.
MEMORIAL EVENTS
Sep
25
Visitation
9:00a.m. - 10:15a.m.
Trinity Lutheran Church
Vinton, IA
Funeral services provided by:
Cedar Memorial Park Cemetery Funeral Home
MAKE A DONATION
MEMORIES & CONDOLENCES
Sponsored by Cedar Memorial Park Cemetery Funeral Home.
2 Entries
I was shocked and surprised and dismayed to see of George's passing. Just earlier this week, I was remembering of George and Terry stopping one late night at the farm house and how we depleted my week's inventory of Blue Moon. All I could hear was his laughter and cackle as we shared stories and life and times. He was always a good friend, a smile to brighten the day, a help for any project, and a wave when passing by. I remember helping him for his farm sale and how we talked, that day, about life and things which now seem so important. He will be so missed, and I cherish knowing him, and his family, and will always miss him. All that I can say is that there will be more happiness in heaven with a brightness to the horizon that may not have been there before. And I am hopeful that he will spend his future time making heaven a better place for the rest of us to come to be with him. I do miss him, already. Bruce A. Gardner
BRUCE A GARDNER
Friend
September 25, 2021
Thank you for your Military service REST IN PEACE
A VIETNAM VETERAN
September 24, 2021
Showing 1 - 2 of 2 results