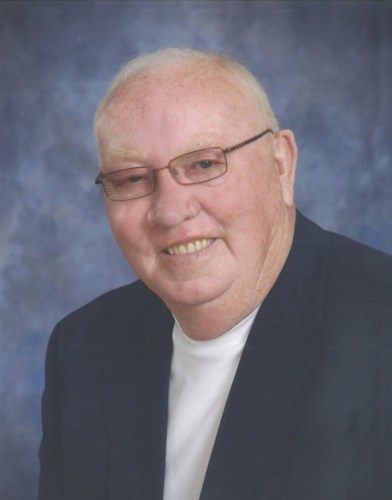 He was born June 23, 1938, in Mason City, Iowa, the son of Walter E. and Vivian (McCulla) Bramhall. He married his high school sweetheart, Nancy Moen, on August 16, 1958, at the First Presbyterian Church in Mason City. Jon was a student athlete at Mason City High School. After graduation in 1956, he was offered an athletic scholarship at Iowa Wesleyan College (IWC) in Mt. Pleasant, Iowa, where he played both football and basketball. While attending IWC, he enjoyed his time as a member of the Sigma Phi Epsilon fraternity. He graduated with a Bachelor of Arts degree in August 1960. Jon worked briefly for HyLine in Des Moines before accepting a sales position in 1961 at a poultry hatchery in Troy, Missouri. In 1968, the Bramhall family moved to Cedar Falls, where Jon started Bramhall Chick Company. In the early 70's the company merged with Lux Pullets in Hopkinton, Iowa, where Jon continued his sales career until 1983. He began a second career as a life insurance agent with BMA, and later represented Mutual Trust Life Insurance Company (MTL). He founded Jon Bramhall and Associates in 1991 where he continued to sell life insurance for MTL and several other companies until his retirement in 2012. Jon and Nancy spent 14 wonderful winters at the Beach Club in Gulf Shores, Alabama, which they considered their "second home". Jon was an avid golfer for over 30 years. He loved to duck hunt, fish, and play poker. He was a bit of a gambler betting on the dogs and just this summer started betting on the horses. He was almost always a winner! He was a kind and generous man who loved his wife, kids, and grandson. Jon was a member of Cedar Heights Community Presbyterian Church since 1969.

He was preceded in death by his daughter, Kathleen Jo Gunby; his parents; three brothers: Willys, Darrell, and Romaine; his sister, Beverly Haxton; his father-in-law and mother-in-law, John and Pauline Moen; two sisters-in-law, Joanne Miller-Littman and Ruth Bramhall; and a niece, Marcie.

Because of Covid-19, there will be no service at this time. A Celebration of Life is being planned for 11 a.m. on August 16, 2021. Please save the date. It is quite special because it would have been Jon and Nancy's 63rd wedding anniversary! Memorials may be directed to the Cedar Valley Hospice Home, 2001 Kimball Ave., Waterloo, IA, 50702; or to a charity of the donor's choice. Richardson Funeral Service is assisting the family.

To plant trees in memory, please visit our Sympathy Store.
Published by Waterloo-Cedar Falls Courier from Nov. 8 to Nov. 15, 2020.
MEMORIAL EVENTS
Aug
16
Celebration of Life
11:00a.m.
Funeral services provided by:
Richardson Funeral Home
GUEST BOOK
8 Entries
Sorry to learn of the passing of Jon. Many memories come back regarding Washington school in 5th and 6th grade softball soccer touch football and bb at Peck´s driveway plus monopoly and cards with Andy Brian Denny Bruns Jon on my front porch. Snowballing sledding down north Adam´s. Those were the good times. He was a true friend as long as I can remember.
Ron Kiser
November 16, 2020
Sorry for your loss. I have so many fun time memories of Jon the redhead which started at Washington elementary in the fifth grade! Snowballing and sleding down north Adams, monopoly and cards on my front porch with neighbors Andy Peck, Brian B, Denny Bruns, And others and Jon. Great times! It was truly super and I miss him as well.
Ron Kiser
November 16, 2020
Sending our love and deepest sympathy, to you, David, Catherine, and William. We love you!
Marie Madrid
November 15, 2020
Wonderful memories of sports played together, hunting and high school...Jon always had a great attitude and a smile on his face
Dave Barnes
November 15, 2020
Nancy, I am sorry to hear about Jon's passing. Over the years I have thought of you two and wondered if there was a way to catch up. See my email if you wouldn't mind letting me know. Most importantly, my sympathies to you and the family. My memories of Jon was one of a big guy with an equally big smile and laugh. He was always an encouragement to me. With regards, Larry Steinbrueck (Troy Hatchery)
Larry Steinbrueck
November 15, 2020
Nancy, We were so sorry to hear about your loss. Jon was a friend and great poker player. We enjoyed our time spent with you and Jon in Gulf Shores.
Bill and Gloria King
November 13, 2020
Nancy, I happened to see the Courier today and noticed Jon´s obituary. I am sorry for your great loss and hope as time passes you will be comforted by all the happy memories you made together. My best to you. Loydene. [email protected]
Loydene Keith
November 13, 2020
Nancy, I did not know about Jon's passing. We are so very sorry. He was a wondeful gentleman. We will be in touch and call us if you need us. Cynthia and Jim
Cynthia Kenyon
November 8, 2020