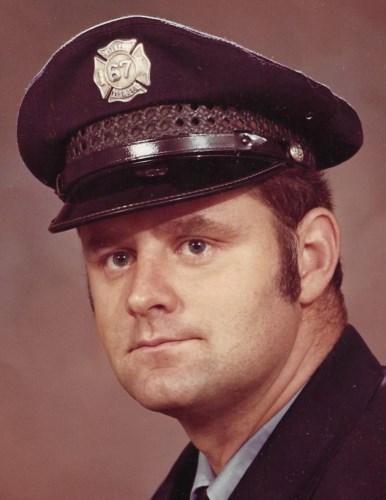 CEDAR FALLS-Larry L. McKinney, 74 of Cedar Falls died Friday, September 24, 2021, at UnityPoint Health--Allen Hospital. He was born September 22, 1947, in Cedar Falls, son of Lewis and Lorraine (Lawrence) McKinney. He grew up in rural Dunkerton and attended Dunkerton High School. On July 2, 1968, he was united in marriage to Linda Spilde in Waterloo, Iowa. Larry spent his life serving others. He enlisted in the US Army and served his country in Vietnam from 1966 to 1969. He returned to Iowa, and in 1973 was hired as a firefighter with Waterloo Fire and Rescue, retiring in 2002. Over 29 years he held many positions including general firefighter, driver, EMT, and training officer. He retired as a decorated and respected Lieutenant and, following retirement, continued his career in the fire service as an inspector, from 2004-2010. Larry was a man of faith, demonstrated by his second career in the ministry. He was ordained on June 1, 2000. He served as chaplain for the Black Hawk County Sheriff's Department (10 years) and Waterloo Fire and Rescue (22 years). Larry was pastor of the Hammond Avenue Brethren Church for six years, retiring in 2018. For most of his life Larry was an active member of Open Bible Church, where he also served as relief pastor. Larry loved spending time with family and friends. His favorite activities included reading, fishing, and playing cards. But, above all else, his greatest joy was helping people. If you were his neighbor, he cleared your snow and freely offered his time and tools. If you were his friend, he would be at your side whenever and wherever he could lend a hand. If you were part of his congregation, he was always ready to drop everything to ease your burden. If you were family, there is nothing he wouldn't do to make your life easier. If you knew Larry McKinney, he probably helped you at some point, and you likely didn't have to ask. He is survived by his wife, Linda; son, Jeff (Ami) of West Des Moines; daughter Pam (Dennis) Craun of Waterloo; grandchildren, Lana, Nile and Calvin McKinney and Kayla and Daniel Craun. Larry is preceded in death by his sister: Judy. Larry led us by example, with an unwavering faith in the Lord. His greatest joy was serving the Church, his community, and spreading God's word.

Memorial Services: 11am Saturday, October 2, at the First Church of the Open Bible (928 Jefferson St. Waterloo). Services will be live streamed on their facebook page. Use link https://m.facebook.com/OpenBibleWaterloo/

Visitation: 5:00 to 7:00pm Friday at the Open Bible Church, Waterloo. Family interment will be held at a later date in the Ivester Brethren Cemetery, Ivester, Iowa. In lieu of flowers, memorials to the family. Visit: www.lockefuneralservice.com.

Published by Waterloo-Cedar Falls Courier from Sep. 26 to Sep. 29, 2021.
To plant trees in memory, please visit the Sympathy Store.
MEMORIAL EVENTS
Oct
1
Visitation
5:00p.m. - 7:00p.m.
Open Bible Church
Waterloo, IA
Oct
2
Memorial service
11:00a.m.
First Church of the Open Bible
928 Jefferson St, Waterloo, IA
Funeral services provided by:
Locke Funeral Home
MAKE A DONATION
MEMORIES & CONDOLENCES
Sponsored by Locke Funeral Home.
6 Entries
My prayers with you Linda and family! I am so very sorry for your loss
Renee E Krutsinger
Friend
October 2, 2021
So sorry for your loss! My thoughts and prayers go out to you Jeff and your family!
Patrick Rogers
Other
September 30, 2021
So sorry for your loss. Sympathy, Thoughts and Prayers for all your family.
Rick and Linda Phillips
Work
September 30, 2021
We were teenagers together at Open Bible Church.Fond Memories.
Patricia Miller
Friend
September 30, 2021
So sorry to hear of Larry´s passing. He was a great guy who served his community well. He will be missed.
HELEN GAYLE LUNDEEN
Family
September 28, 2021
Larry was a great man who will be missed by many. My thoughts and prayers are with you, Linda and your family.
Jean Sheppard
September 27, 2021
Showing 1 - 6 of 6 results