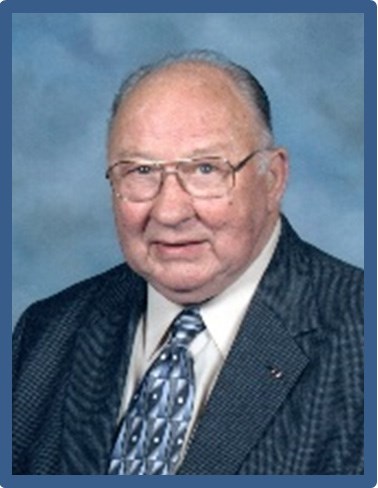 Merlin was born on January 3, 1925 in Holy Cross, IA the son of Alphonse L. and Olivia H. (Wernke) Hermsen. He attended elementary schools in rural Dubuque County. In 1937 his parents purchased a farm southeast of Independence, and he began attending St. John's Catholic School. He joined the United States Army in 1946 and served in Korea, during the peacetime occupation prior to the Korean War. After his service he returned to Independence to help take care of his family and the farm. He started working at John Deer in Waterloo, IA in 1951, and he retired in 1983. On July 19, 1975 he married Clara Hoeger at the St. Columbkille Church in Dubuque, IA., and together they purchased a home in Independence, IA. Clara died on June 11, 1988. He married Jeanne Frances (Robinson Connell) on September 24, 1994 at the St. John's Catholic Church in Independence. Merlin was a member of the St. John's Catholic Church, Catholic Order of the Foresters since 1952, and the Knights of Columbus since 1957.

Merlin loved to stay busy with his hands and was an avid woodworker. Many of his projects throughout the years he did for family or friends. He also donated several projects to St. John's Church. He collected John Deere Toy Tractors and memorabilia and would often go to farm toy shows throughout the state.

To leave an on-line condolence please go to www.reifffamilycenter.com under obituaries.