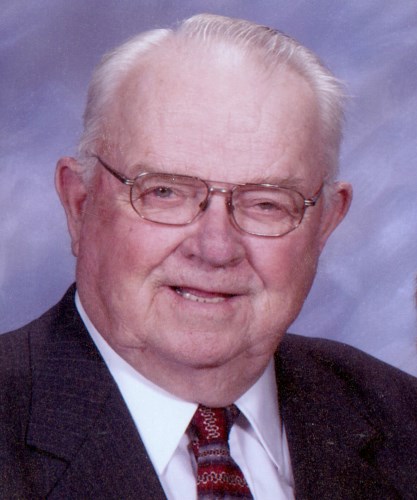 A Mass of Christian Burial will be held at 1:30 p.m. Wednesday, September 22, 2021, at St. Luke's Catholic Church, St. Lucas, IA, with Rev. Nick Radloff celebrating the Mass. Interment with military honors will be in the church cemetery.

Philip Kruse was born on July 11, 1931, to Frank and Mathilda (Rasing) Kruse in Waucoma, Iowa and he grew up on a farm, where he helped his parents with a variety of chores, including one - milking cows - that he did for most of his working life.

Philip attended St. Mary's Catholic School in Waucoma through the eighth grade and then attended Waucoma High School, where he played basketball and baseball and was a member of the Class of 1949.

After graduation, he worked as a hired hand for several farmers before enlisting in the U.S. Army in 1952. He completed his basic training at Fort Riley, Kansas, and rose to the rank of corporal as a military policeman stationed in Frankfurt, Germany, during the Korean War Era.

Philip returned to Iowa after receiving his honorable discharge, and in November 1956, he attended a wedding dance at Chip's Ballroom in Lawler and as the night wound down, his buddy, Chub Winter, dared him to dance the last dance with a pretty girl named Rosemary Hageman standing near the door. Chub turned out to be a heck of a matchmaker, for the couple not only danced that "Blue Skirt Waltz" but they began dating, fell in love, and were married on May 7, 1958, at St. Luke's Catholic Church in St. Lucas.

Philip worked for several farmers before the couple purchased his family's farm north of Waucoma, where they raised crops and livestock and ran a dairy operation until Philip retired in 1993.

The Kruse's had three children - Daryl, Debra, and Daniel - and when they were growing up, they loved spending time with their dad. They worked together a lot - milking cows, cutting and storing hay, and planting and harvesting crops. Philip loved going fishing with his kids, be it at rivers around Waucoma or making the trek over to the Mississippi, and his kids still have fond memories of going to the fireworks in Alpha and New Hampton with Dad.

After retiring, Philip and Rosemary built a new house - Philip did a lot of the carpentry work, too - on the Turkey River in Waucoma, and he remained a man on the go. He believed in service, and he was a founding and lifetime member of the VFW Turkey River Post 3902, where he served as commander for 23 years. He also was a longtime member of the American Legion Post of Waucoma and was its commander for six years. For 10 years, he was the director of Jackson Township for the Winneshiek County Farm Bureau, and he was an active member of the Waucoma Historical Society, serving as its treasurer

Philip enjoyed attending farm sales and had an eye for antiques and vintage mantel clocks. He also could fix just about anything, and he was one of the last people around who could splice hay rope

But the center of his life was his wife of more than 63 years, his three children, his five grandkids, two great-grandchildren, his fellow veterans, and his friends, all of whom will miss this hard-working man who proudly served his country and the little corner of the world he called home.