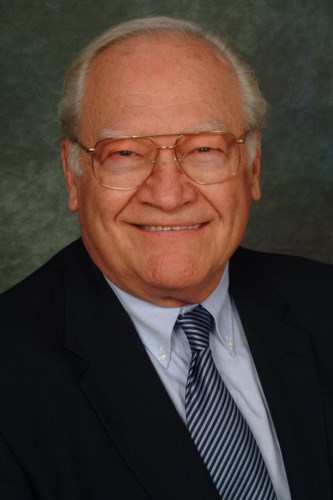 Sid was born on the family farm in rural Taylor County, IA on September 18, 1932, the son of Vilas Sr. and Ruth (Salen) Morris. He grew up on a farm near the Missouri border, attended K-8 grades in Gay Center Township School (a one-room country school). He attended Bedford High School his freshman year, then transferred to Blockton High where he graduated in 1950.

Sid was drafted, inducted into the Army, took basic training at Camp Chaffee, AR, trained in fire direction, and shipped out to Korea. From his arrival the fall of 1952, until the June 1953 cease-fire, his artillery unit saw action along the MLR from mountains with names such as Old Baldy and Pork Chop Hill. After he left Korea he was stationed at Camp Carson, CO.

Upon completion two years of military service, he returned to Iowa and unexpectedly was offered an elementary teaching position. His goal then became to complete a BA degree in teaching.

On August 18, 1956, Sid and Alvira Stock were married in the First Methodist Church Bedford, Iowa. They left Bedford to attend and complete BA degrees at ISTC (now UNI). They did that and have lived in Cedar Falls since then. Sid and Alvira raised two sons, Jeff and Dan, and have had the privilege of enjoying grandchildren and now great-grandchildren.

Upon completion of a BA degree in January 1958, Sid was offered an elementary teaching position at Edison Elementary/Jr. High School, in Waterloo. In 1960 he became the Assistant Principal which was the beginning of a long career in school administration. He culminated his career as the Administrator of River Hills School from which he retired in 1995.

Sid served his city through terms on: Board of Adjustment, Planning and Zoning, City Council and Cedar Falls Utilities.

Sid was a proud member of several Veterans organizations. He was a life member of the American Legion, Veterans of Foreign Wars, AMVETS, and Korean War Veterans Association. He also belonged to 7th Infantry Division Association, in which he served on the Board of Governors for many years. He was a member of 40 & 8, member, and past president of Iowa Chapter 99, KWVA and PO2 Taylor Morris Chapter 323 of KWVA. Sid also served on the Black Hawk County VA Commission.

It is said "You can take a boy off the farm, but you can't take the farm out of a boy." That was apparent by Sid's love of their acreage; tilling the soil for his expansive gardens, planting an orchard, riding his John Deere garden tractor for mowing grass hours on end, trimming trees and clearing brush. His asparagus, rhubarb and raspberries were well known. He became fascinated by the many varieties of plants in the "Morris Tall Grass Prairie" he and Alvira had planted.

A gathering to share memories and honor Sid, "A Time to Remember the Life of Sid Morris" will be June 19th, 2:00 – 4:00 pm at The Diamond Event Center, Western Home Communities, 5307 Caraway Lane, Cedar Falls, with Military Honors at 3:00. Please come with a memory or story to share.

A private family service will be held. The family requests no flowers. In lieu of flowers: memorials may be made in the name of Vilas "Sid" Morris to: Western Home Foundation,

Online Condolences may be left at www.richardsonfuneralservice.com.

To plant trees in memory, please visit our Sympathy Store.
Published by Waterloo-Cedar Falls Courier from May 23 to Jun. 6, 2021.
MEMORIAL EVENTS
Jun
19
Funeral service
2:00p.m. - 4:00p.m.
Western Home Communities-Diamond Event Center
5307 Caraway Lane, Cedar, IA
Funeral services provided by:
Richardson Funeral Home
MAKE A DONATION
Please consider a donation as requested by the family.
MEMORIES & CONDOLENCES
Sponsored by Richardson Funeral Home.
8 Entries
Mr. Morris was my teacher at Edison school. He was a very kind, patient, and loved his smile. He caught me in a lie, and I never forgot it when I was in 7th grade. He spoke to me in Love, when I deserved to be punished. A lesson learned I never forgot. A great and wonderful man. My deepest sympathy to Sid's family. God bless
Bob Lewis
June 16, 2021
I knew Sid from the days when mayor Crews father had a gas station and grocery store on 27th and Main St. Sid was a very pleasant customer and always had a big smile. I never saw him without that smile. He always remembered me which made me feel like I was important. Well done good and faithful servant to our country, state, and city.
Butch Brown
Friend
June 6, 2021
Sid was a great man and we we´re lucky to know him and he made amazing differences for his community. My sympathies to his family.
Becky Junge
Friend
June 6, 2021
Alvira. Sid was an amazing person. He will be greatly missed. My deepest sympathy to you and your family.
Helen Curtis
Work
May 28, 2021
Alvira and family. Sorry to hear of Sid's death. He and Alvira were great co workers with me in the past. Thing of both of them often.
Pat ORourke
Work
May 25, 2021
So sorry to hear about Sid. My prayers go out to you and your family during this difficult time.
Sharon Fackler
Friend
May 23, 2021
My deep hearted sympathy to the whole family. Sid was so special in my church life. Always a great smile and usually a hug whenever i needed it. Sid helped me thru big struggles when my grandson got hurt in Afghanastan only to have to live thru his own grandson got hurt. "his buddy" (as he called Quentin) and my family will always remember Sid with a smile!
C.J. McCunniff
May 23, 2021
My greatest sympathy to Alvira and the rest of the Morris family. Sid was a wonderful man and will be sorely missed by all.
Pat Trampel
Friend
May 23, 2021
Showing 1 - 8 of 8 results