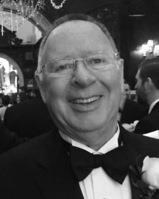 BORN
1947
DIED
2021
Alan Hahn Eugley
June 30, 2021
Alan Hahn Eugley passed away on Wednesday, June 30th, 2021 in Westport, Connecticut, surrounded by his family at home, following a long and steadfast battle with pancreatic cancer.
A retired banking executive, Alan graduated from Lehigh University with a BS in Economics and an MS in Business Economics. His 45-year career in banking included executive positions at Bankers Trust and Marine Midland Bank. He spent the last twenty years of his career at Fiserv.
Alan had deep roots in New England. He grew up in Winchester, Massachusetts, and spent many summers at his family's cottage in Lincolnville, Maine, where he loved to hike, kayak and swim in Norton Pond. A rock music enthusiast, he played the guitar in college and high school bands, and later, he delighted in his daughter Allison's flute performances and playing guitar with his son Seth. During his retirement, Alan spent every Sunday with his special-needs daughter, Elizabeth. Alan also was involved with his wife Emily's art practice, helping with exhibition installations.
A 27-year resident of Westport, CT, Alan enjoyed boating and golf, and was an active member of Westport's Longshore Men's Golf Association. Known for his jovial and upbeat approach to life, Alan could be found at five o'clock enjoying a martini, whether he was in Connecticut, Maine or Florida.
Alan is survived by his wife Emily Hamilton Laux, his mother Mary Louise, his daughter Allison (Geoff), his son Seth, his daughter Elizabeth, his two sisters Gwen (Rick) and Melissa (Paul). He is also survived by his stepchildren Madeleine and Jack, his niece and nephews Nicolina, Paul and Will, and his two grandchildren Amelia and Brady. He is also survived by his former wife Susan McShane; his wife Karen Treadwell predeceased him.
A memorial will be held in Westport in August. In lieu of flowers, donations can be made to STAR, which provides services to special-needs children and adults in Connecticut. An online link to Star is here: https://secure.qgiv.com/for/starct/
Published by Westport-News on Jul. 14, 2021.
To plant trees in memory, please visit the Sympathy Store.
MEMORIAL EVENTS
To offer your sympathy during this difficult time, you can now have memorial trees planted in a National Forest in memory of your loved one.
MAKE A DONATION
MEMORIES & CONDOLENCES
5 Entries
Seth, I'm sorry for your loss. Your dad was great guy!
Gene Pino
Friend
July 31, 2021
Alan and I worked together at two different companies. We first met in 1994 at Nationar (no that's not a typo) in Danbury just before the company went under. But within a year we were at Fiserv, where both of us would spend 20 years. Alan was smart, witty, engaging, and always fun to work with. I'll always remember a great round of golf that we played together many years ago here in Central New York. I always enjoyed getting the chance to chat will Alan about work and other things. My sincerest condolences to Emily and the rest of the family.
Peter Bleiberg
Work
July 18, 2021
Beautiful tribute. love to you Emily and to your family.
Katherine Ross
July 16, 2021
I just read this morning of Alan´s passing. I worked with Elizabeth at Coleytown Elementary. Alan was always an easy person to be with and very hospitable. I will miss him, too. I will be praying for you and your family members as you walk this journey of loss.
Tina Hays
Friend
July 16, 2021
He did an amazing job hanging then disassembling your Art Exhibit in Providence, after which we enjoyed a wonderful evening & some overlaps in our guys careers. What a blessed partnership & love you shared.
Ann & Jeff Diehl
Friend
July 15, 2021
Showing 1 - 5 of 5 results