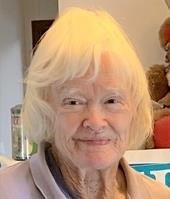 BORN
1938
DIED
2021
Ann Marie Flynn
"Auntie Ann"
On Thursday evening, July 22,2021, Ann's soul passed peacefully into the hands of Heaven. As a devout Catholic, she was certain of a glorious after-life.
Born on August 17, 1938 and raised in New York City, Ann was an avid Yankees fan. As a high school senior, Ann was invited to the 1956 Olympic Games in Melbourne, Australia to participate in the high jump event. She went on to win the Gold Medal in the 1959 Pan American Games and shatter records at Colorado State University which she attended.
Never marrying, the loves in Ann's life were all dogs. Most recently (the very yappy) Mario .
After a very respectable career at Sea-Land in New Jersey, Ann settled down in Westport, Connecticut. There she became involved in town politics and was voted in as a representative with the RTM where she served for over ten years.
Ann was an advocate, a voice for the dogs of Westport. She was a vital part of WASA (Westport Animal Shelter Association) Winslow Park and Compo Beach are dog friendly places as a result of Ann's efforts. Her face was a familiar face in both places.
Though Ann's heart may have grown weak, her love lives on strong in the hearts of her twin brother Michael, and her loving nieces and nephews John, Cathy, Michael, Robert, Cheryl and Mary. Ann had an older sister, Beatrice, who went before her in May of 2020.
Mario, Ann's beloved dog and friend, has been so very graciously adopted by Ann's dear friend, Peter.
As consistent with Ann's quiet, soft soul, Ann requested that there be no service.
Ann's ashes will be laid to rest beside her mother, Mary, her father, Martin and her older sister, Beatrice.
We blow out the candle when the sun comes up.
We will miss your light, Auntie Ann, and we look forward to seeing you again in the light of Heaven.
Published by Westport-News on Jul. 28, 2021.
To plant trees in memory, please visit the Sympathy Store.
MEMORIAL EVENTS
To offer your sympathy during this difficult time, you can now have memorial trees planted in a National Forest in memory of your loved one.
MAKE A DONATION
MEMORIES & CONDOLENCES
2 Entries
She lived so passionately and seemed larger than life. I´m so sorry for your loss.
Mary Palmieri Gai
Work
September 12, 2021
We're so heartbroken to hear the news of Ann's passing; she lived such a big, full life that it felt like she would live forever. Dr. Dan was Ann's veterinarian, and we loved hearing Ann's stories of her camping adventures with her various canine friends, her feats of athleticism, and all of her passionate political views. Certainly, we're saddened by this news, but Ann's engagement in life will continue to be an inspiration to us and to so many others. Our sincerest condolences and lots of hugs to all of Ann's family and friends.
Annikki Nurmi and Dan Whalen
Friend
August 31, 2021
Showing 1 - 2 of 2 results