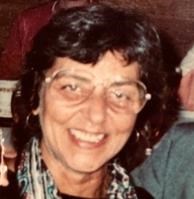 BORN
1926
DIED
2019
Estelle Thompson Margolis
May 6, 1926 - March 1, 2019
Estelle Thompson Margolis died peacefully on March 1st at age 92, on what would have been her 60th wedding anniversary. Estelle had lived in Westport since 1965. She was an architect, artist and activist.
But to everyone who knew her, she was a life force. She lived her 92 years on her own terms, and she spread love, warmth, creativity and her distinct set of passionately-held beliefs to everyone in her life.
Born on May 6, 1926 in the Bronx to Deborah Silver Thompson and Samuel Thompson, Estelle graduated from high school at age 16 and made her way into Manhattan, where she worked in advertising.
In 1946, when Estelle was 20, the artist Ben Shahn hired her to work in the art department at the CIO-Political Action Committee, creating pamphlets and posters for Democratic party candidates. Pursuing her burgeoning political activism, Estelle spent the summer of 1947 at the integrated Highlander Folk School in Monteagle, Tennessee, where she taught a course in creating organizing leaflets. She helped construct a building on the Highlander property, which led to her interest in architecture.
In 1948, she worked with Shahn again, on the Henry Wallace presidential campaign. In 1950, Shahn insisted that Estelle be admitted to the Yale Architecture School. Women were rare in architecture schools at the time, and a woman applying to graduate school without a college degree was even rarer. She graduated from Yale in 1955 and accepted a job in a large architectural firm in New Haven.
Estelle met her late husband, Emanuel (Manny) Margolis in New Haven. Manny was a recent graduate of Yale Law, and beginning his own career. Estelle and Manny moved to Norwalk, CT in 1960; over the next few years, Estelle practiced architecture in Stamford while Manny practiced law. In 1965, their family moved to Westport.
Estelle opened an architectural office on the third floor of their Westport home, as well as an art studio. Over her lifetime, Estelle worked on some 250 buildings and renovations as an architect, and created hundreds of paintings and drawings. A retrospective of her artwork, entitled "Moments of Truth," was exhibited at the Westport Library for the month of September 2007.
Estelle was a passionate advocate for peace and justice, and was a familiar presence in Westport for her political activism. Every Saturday, Estelle organized protest vigils on the Ruth Steinkraus Cohen Bridge in downtown Westport.
Estelle is survived by five children: Elizabeth Margolis-Pineo, Catherine Margolis, Abby Margolis Newman, Joshua Margolis, and Sarah Margolis Marsh. She was also the proud Buba to ten grandchildren: Sarah Margolis-Pineo, Jessica Greenhalgh, Rachel Margolis-Pineo, Hannah Goodman, Adam Goodman, Jonah Newman, Aaron Newman, Henry Newman, Matilda Margolis and Cody Marsh. She is also survived by her sister, Corinne Schreier, and many cousins, nieces and nephews.
Her friends and family will remember and cherish her as a woman of tremendous warmth, principle, energy and creative talent, and as a remarkably generous spirit. Her powerful maternal embrace encompassed not only her beloved family, but a vast array of wonderful friends and neighbors.
Sarah Marsh, her youngest, wrote the following as part of a tribute to Estelle from the Democratic Women of Westport: "My mom taught us how to care, and has shown all of us—by standing on the bridge every Saturday—that she deeply cares about the rest of the world. She and my father always gave us a sense of the bigger picture, and how others lived, so we would know the true meaning of Civil Rights. My mother also taught us how to be autodidactic outside of school. She insisted we read every day, and taught us about what hatred and bigotry can do, and why we should fight it. We are forever grateful for her wisdom."
Estelle will be deeply missed by so many. Donations in her honor can be made to the Westport Library, 20 Jesup Road, Westport CT 06880 or online at westportlibrary.org/support-wpl/donate. 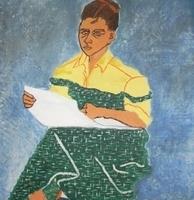 To plant trees in memory, please visit our Sympathy Store.
Published by Westport-News on Mar. 13, 2019.
MEMORIAL EVENTS
No memorial events are currently scheduled.
To offer your sympathy during this difficult time, you can now have memorial trees planted in a National Forest in memory of your loved one.
MEMORIES & CONDOLENCES
4 Entries
I'm so sorry to learn of Estelle's passing. I really loved her; her warmth, her intelligence and her creativity never failed to lift my heart. I will miss Manny and Estelle forever.
love, Annie Thorkelson
Annie Thorkelson
September 14, 2019
Deepest condolences and heartfelt love to all the Margolis extended family on the passing of your Mom...I will never forget the amazing, long hugs she would give when you walked in the door of your parent's home...her passion and dedication to art and social justice was inspiring to witness. A beautiful and inspiring obituary. Wow, what a life...
-Bradley Hughes, San Francisco, CA
May 4, 2019
We were so sad to just hear about your dear mother whom we loved very much. We have wonderful memories.
fondly, John and Linda
John Silver
April 29, 2019
To the family, I'm so sorry for the loss of your loved one. May the loving support of your family, friends and prayers sustain you through this very difficult time. Isaiah 57:15
Angie
March 13, 2019
Showing 1 - 4 of 4 results