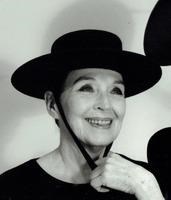 BORN
1925
DIED
2021
Jean Woodham
Jean Woodham, 96, died in her home in Westport, CT on October 28, 2021.
She was born to Marcus Morton Woodham and Alma Clements Woodham in Midland City, AL on August 16, 1925. Woodham earned a B.A. at Auburn University in 1946 and immediately headed to New York City to be an artist. She worked and studied at the Clay Club alongside Louise Nevelson. In a short time Jean Woodham was exhibiting her sculpture in group shows with David Smith, Alexander Calder, Isamu Noguchi, and Nevelson. In 1949 she married and had two daughters. The family moved to Norwalk, CT in 1955 and Woodham became head of the sculpture program at Silvermine Guild of Artists. She showed her work in galleries and museum exhibitions and won many prestigious prizes. In 1959, Louise Nevelson sponsored her for membership in the Sculptors Guild. Woodham's family moved again in 1962 to Wilton, CT. Six years later she divorced her husband and began to focus on making large-scale commissioned public sculpture. Her first commission was for three fountain pieces for Flintkote Company in White Plains, NY. In 1970—with proceeds from her commission—she bought a house in Westport and converted the garage to a studio. Another commission followed for three large fountain sculptures at the General Electric Credit Corporation Executive Offices in Stamford, CT. In 1975, Jean Woodham won a competition for the largest commission ever awarded by the New York Board of Education. She had to add a 40-ft tall addition to her house in order to create the 28-ft tall welded sculpture called "Scholars' Sphere," installed at Harry S. Truman High School in Co-Op City, NY. In 1986, Jean Woodham married Harold L. Friedman, a Clio award-winning producer of television commercials. She served as president of the Sculptors Guild from 1990-93. Her husband died in 1995. A year later, Auburn University gave Woodham a fifty-year retrospective show under the auspices of the Franklin Lectures in Science and Humanities. Jean Woodham was a founding member of the Jule Collins Smith Museum of Fine Art at Auburn University. Her last major show was held in 2013 at that museum in Auburn. Jean Woodham was preceded in death by her father and mother; her sister, Elizabeth Vadella (Woodham) Clark; brother, Marcus Morton Woodham; brother, John Webster Woodham; ex-husband, James Lee Caraway; and husband, Harold L. Friedman. She is survived by her daughter, Melissa (Caraway) Russell Deur (and her husband, Charles Jay Deur) of Arlington, TX; daughter, Elizabeth Leigh Caraway of Atlanta, GA; grandson, Trey Braden Russell (and his wife, Aimee Jacinto Russell) and great-grandchildren, Cash Nolan Russell and Stella Grace Russell of Grand Prairie, TX, as well as many loved nieces and nephews. She is also survived by Harold Friedman's children: Nancy Friedman Devlin (and husband Brian) of Australia; Jill Friedman Ponzini (and husband Gianni) of Italy; and D. Rufus Friedman of California. A celebration of life is planned in the near future.
Published by Westport-News & Connecticut Post on Nov. 2, 2021.
To plant trees in memory, please visit the Sympathy Store.
MEMORIAL EVENTS
To offer your sympathy during this difficult time, you can now have memorial trees planted in a National Forest in memory of your loved one.
MAKE A DONATION
MEMORIES & CONDOLENCES
0 Entries
Be the first to post a memory or condolences.