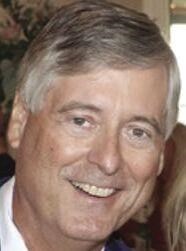 Charles (Chip) Austin Barber IV died on September 9, 2021, surrounded by his loving family. He is survived by his wife of 38 years, Kathy, and their three children, Emily (John) Bear, Melissa (Jordan) Hartman and Chad (Brooke) Barber. He was blessed with two granddaughters, Maggie and Allie Bear, who adored their "Ampa."

He is also survived by his parents, Chuck and Carolyn Barber and his sister, Bryn (Terry) Fine, as well as many nieces, nephews, uncles, cousins and in-laws.

Chip was born in St. Louis, Missouri on January 28, 1960. He grew up in Pittsfield, Illinois where he enjoyed golfing and music. He was appointed as a Congressional Page in the U. S. House of Representatives in Washington, DC and spent his high school senior year there. He attended Capitol Page School at the Library of Congress and graduated in the White House Rose Garden with President Jimmy Carter handing him his diploma. He met the love of his life and soulmate in Washington, DC where Kathy also served as a Congressional Page that year.

He attended the University of Illinois in Champaign-Urbana where he was a member of Beta Theta Pi fraternity and was elected Treasurer. He graduated in 1982 with a degree in Finance and earned his CPA license. He began his career at Arthur Anderson in Chicago.

Shortly after graduation, he and Kathy were married in Wheaton, Illinois. They spent many years in Downers Grove before moving to Geneva where they raised their children.

Chip spent most of his career in Community Banking, where he loved nurturing relationships with his customers and taking care of their commercial and business needs. He retired after working in the Destin/Fort Walton Beach, Florida area as a Regional Market President for a large bank.

Chip was an active community leader and servant, with Rotary in both the Chicago area and Destin, serving as President. He participated on many boards, including the Downers Grove YMCA, Cosley Zoo, his Homeowners Association and the U of I College of Business Alumni Association.

Chip loved teaching his children the game of golf as well as coaching their youth teams for softball, soccer and basketball. He was a huge fan of the Fighting Illini Football team and followed their ups and downs over the years. He proudly raised his children as St. Louis Cardinals fans in a Cubs world. He loved attending annual get-togethers at Lake Geneva with his Downers Grove friends for more than 15 years, bringing the "Barber Island" for the "LG-DG" group to enjoy. Destin became his new home and neighbors quickly became friends. He loved his beach time and captaining the boat with friends and family aboard. Lifelong friends from Geneva and Downers Grove were frequent visitors to the Emerald Coast.

Despite his colon cancer diagnosis, he remained positive and gracious. He never complained and never lost sight of his profound faith. He always found time to listen and to find the bright side of every situation. He held his family closer and made sure they knew how much he loved them. His family thanks the many prayer warriors across the world who lifted him up and supported him during this difficult journey. He was blessed by so many calls, cards and visits during this last year – from childhood, high school, college, business and neighborhood friends and his extended family who touched our hearts with their love for Chip. And, most of all, he was blessed by the compassionate care that his children and their spouses showed him in his last week, attentive to his every worldly and spiritual need.

A memorial service will be held at the First Christian Church in Pittsfield, Illinois on Saturday, October 9 at 11 am, where Chip was a 7th generation Member. Private Celebrations of Life will be held in Chicago and Destin.