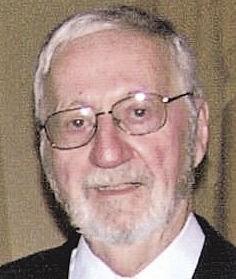 He was married to Dorothy Homan on December 10, 1994 in Bethel, MO. She survives.

C.W. was preceded in death by his parents and several cousins.

After graduating from Bethel High School, C.W. proudly served his country in the United States Army for two years during the Korean War.

Professionally, C.W. was an electrician by trade and a union member of IBEW. He retired from Supreme Electric in Quincy, IL. At one time, he also owned a car dealership and hardware store in Shelbyville, MO.

C.W. loved Sprint car racing as both an owner and spectator. He was a mechanical craftsman and had his own workshop, where he spent a lot of time doing small engine repairs and working on model cars and tractors. He also restored antiques in his spare time.

C.W. was a member of Madison Park Christian Church, where he served as an elder and president of his Sunday School class. He also volunteered many hours doing electrical work at the church.

Memorial contributions may be made to Madison Park Christian Church or Mount Pleasant Cemetery Association.

Online condolences may be shared and a video tribute may be viewed at www.ODonnellCookson.com.

Published by Herald-Whig on Jan. 2, 2021.
To plant trees in memory, please visit the Sympathy Store.
MEMORIAL EVENTS
To offer your sympathy during this difficult time, you can now have memorial trees planted in a National Forest in memory of your loved one.
Funeral services provided by:
O'Donnell-Cookson Life Celebration Home
MAKE A DONATION
MEMORIES & CONDOLENCES
Sponsored by O'Donnell-Cookson Life Celebration Home.
5 Entries
So sorry he's gone , I will remember him and all our family get togethers fondly RIP first cousin
Trudy Collins-Cervantes
January 6, 2021
So sorry to hear of your loss Kelly and Dorothy and the rest of your family, please know you are in my thoughts and prayers!
Teena Sparks
January 6, 2021
I am sorry to learn of "CW´s" passing. He was a fine man and we enjoyed many nights of sprint car racing together. "RIP my friend".
Phil Howe
January 4, 2021
SO VERY SORRY TO HEAR ABOUT C W HE WAS A GREAT MAN
JIM JONES IBEW#34
January 3, 2021
Dottie, sorry to hear.
John Toumbs (Bergner's)
January 2, 2021
Showing 1 - 5 of 5 results