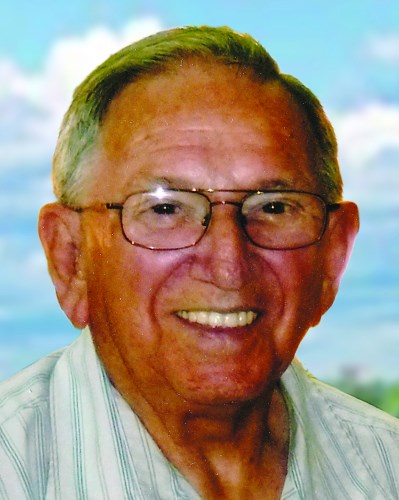 Capt. Clayton E. Hanlin, formerly of Hamilton, Ill., gently passed away at the Illinois Veterans Home in Quincy while holding the hand of his wife of 66 years, Vivian Hanlin, on Sunday, Oct. 25, 2020.

He served as an airborne ranger in the army during the Korean Conflict. He was awarded a Bronze Star with Valor and the Purple Heart with Oak Leaf Clusters during his service. On the occasion of the 50th anniversary of the Korean War, he was selected to take part in the ceremonies in Washington, D.C., where he was personally thanked by the Korean Ambassador for his service.

He married Vivian Hagmeier on Jan. 23, 1954. He held a Master Pilot license which allowed him to be the captain for boats and ships with all tonnage on all bodies of water in the United States. He spent 52 years operating towboats mainly on the upper Mississippi, Illinois and Ohio Rivers. His job meant he was on a boat a month at a time and working every other Christmas, but somehow, despite this requirement, he found a way to be home by most Christmas mornings which was a day he cherished being with his family.

He enjoyed World War II history and visiting battlefields in Europe and North Africa. He taught his children to sail, and enjoyed working on MGB roadsters, gardening, traveling with Vivian by car or train throughout the USA, by passenger boats on the Mississippi River, as well as trips to Europe, and Africa. Most of all he loved his wife, his children and grandchildren.

He was a member of the United Methodist Church and Methodist Men in Hamilton, Ill. He worked with Cub Scouts and Boy Scouts earning the Pilot award in 1969. He was a commander of the VFW Post in Hamilton.

He is survived by his wife Vivian of Hamilton; his children, Steve (Jeffrey) Hanlin of Nauvoo, Jane (Dick) Walters of Rock Island, Capt. Mark (Amy) Hanlin of Montrose, Iowa, and Kirk Hanlin of Arlington, Va.; his grandchildren, Savannah Hanlin of Burlington, Iowa, and Lt. Lucas Hanlin of Fort Benning, Ga.; one brother, Michael A. Hanlin of East Moline, Ill.; and numerous nieces, nephews, great nieces & great nephews. He was preceded in death by his parents, sister Jeanette Hanlin and son Rick Lee Hanlin.

Due to COVID-19 private family graveside services will be held with full military honors. DeJong-Greaves-Printy Funeral Home in Keokuk is in charge of arrangements. Condolences may be left at dejongsfuneralhome.com.

To plant trees in memory, please visit our Sympathy Store.
Published by Herald-Whig on Oct. 27, 2020.
MEMORIAL EVENTS
No memorial events are currently scheduled.
To offer your sympathy during this difficult time, you can now have memorial trees planted in a National Forest in memory of your loved one.
GUEST BOOK
2 Entries
Prayers for peace of mind So sorry to hear this. Mom sends her love
Robert Winters
October 28, 2020
Vivian and Family:
So sorry to hear of the passing of Clayton!
Wow 66 years of marriage is so amazing.
Pat and I want to say to you, and your family you have our sympathy and prayers at this time of sorrow.
God be with you all!
"Ray and Pat Miller"
Ray Miller
Classmate
October 28, 2020