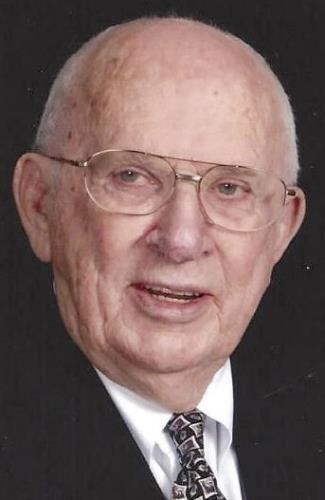 Howard was a graduate of Clayton High School. Howard and Joan Ashbaker were married at St. Mary Church of Mt. Sterling, IL on May 27, 1953, and recently celebrated their 68th Wedding Anniversary.

Howard served in the U.S. Air Force during the Korean War. He was employed as a V.P. at Town & Country Bank, General Manager of Moller & VandenBoom Lumber as well as other positions in the Finance field until his retirement.

After retirement, when they moved back to Quincy, Howard enjoyed his passion for golf by working part-time at Westview Golf Course in Quincy, IL.

He enjoyed sports and was an avid golfer. Bowling, baseball, fishing and hunting were also passions of Howard's as was traveling with his wife after retirement.

He was a wonderful, husband, father, grandfather, and great-grandfather and will he be missed as well by those who had the pleasure of making his acquaintance over the years.

As a member of St. Peter Catholic Church, Knights of Columbus, the Elks Club, and various golf clubs, he enjoyed being active in the community.

Howard was preceded in death by both of his parents, one brother Robert Buckley and his wife Mary, and a grandson, Ryan Buckley.

A Mass of Christian Burial will be on Monday, December 6, 2021 at 11:00 a.m. at St. Peter Catholic Church in Quincy, IL with Monsignor Leo Enlow officiating. Burial will be in Mt. Sterling Catholic Cemetery at 3:00 p.m. Monday afternoon. Visitation will be Monday from 10:00 a.m. until the time of services at 11:00 at St. Peter Church. In lieu of flowers, please consider a donation to St. Peter School, St. Peter Catholic Church, Quincy Notre Dame Foundation or a charity of your choice in Howard's honor. Service arrangements are with Duker & Haugh Funeral Home. Messages may be shared online at: www.dukerandhaugh.com

Published by Herald-Whig from Nov. 30 to Dec. 8, 2021.
To plant trees in memory, please visit the Sympathy Store.
MEMORIAL EVENTS
Dec
6
Visitation
10:00a.m. - 11:00a.m.
St. Peter Catholic Church
Quincy, IL
Dec
6
Mass of Christian Burial
11:00a.m.
St. Peter Catholic Church
Quincy, IL
Dec
6
Burial
3:00p.m.
Mt. Sterling Catholic Cemetery
IL
Funeral services provided by:
Duker & Haugh Funeral Home
MAKE A DONATION
Please consider a donation as requested by the family.
MEMORIES & CONDOLENCES
Sponsored by Duker & Haugh Funeral Home.
2 Entries
Our Father in Heaven matched two of the most beautiful people together years ago when Howard met Joan. Brenda and I were privileged to have spent 3.5 years living next door to them. They were the kindest people we´d ever met. They quickly engaged with us as if we were their own children. Joan, used to call me her 4th son. We spent those 3.5 years really getting to know them. We visited together, had meals together and played cards all of the time. They taught us how to play Bridge and we had such a wonderful time. Howard usually couldn´t wait until our next card game because Brenda would always make something for Howard´s sweet tooth. He loved her chocolate cake and the frosting even better. We´ve always kept in touch but raising our family we didn´t get together over the years much and I am truly sorry for that. As I said they treated us like family and we also were fortunate enough to meet all 3 of the boys at one time or another. Lord you have taken a very special Angel to heaven. Please make sure he gets a good tee time for his friends and family. Joan, please know how much we love both of you and what a special place you will always have in our hearts. May the Lord be with you and your family and surround you with his Grace and Comfort. Love Dave & Brenda Carlson
Dave & Brenda Carlson
Friend
December 5, 2021
So sorry to hear of your loss. Prayers for comfort for your family during this time.
Mandy Cobern
December 1, 2021
Showing 1 - 2 of 2 results