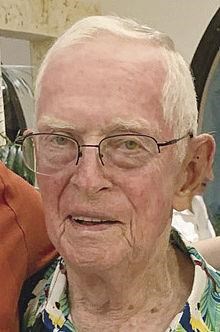 He was born Nov. 5, 1935, in Quincy, Ill. He graduated from West Pike High School and from the University of Illinois.

He was commissioned into the U.S. Army and served as an Army Ranger in the 101st Airborne Division. Upon his discharge, he attended Purdue University where he earned a Master's Degree in Agricultural Economics. It was there that he met his wife of 59 years, Jo Lysek, a native of Tarpon Springs, Fla.

He worked for three years for the Indiana Highway Commission as an appraiser and chief review appraiser before going into business with other real estate appraisers. He ultimately formed his own company, Richard E. Nichols and Associates, located in Indianapolis, Ind., specializing in commercial and industrial real estate appraisals and feasibility studies. Among his clients were the Simon Property Group and the city of Indianapolis. He was a member of the Society of Real Estate Appraisers and in 1985 served as its international president. At that time it was the largest real estate appraisal organization in the world. The Society later merged with the Appraisal Institute of which he was also a member. He belonged to the American Society of Appraisers, Farm Managers and Rural Appraisers, the American Right-of-Way Association, and the Real Estate Counseling Group. He chaired the National Appraisal Foundation and the Indiana Real Estate Appraisal Licensing Board. He was named a Sagamore of the Wabash by Indiana Gov. Robert Orr. He was a member of Rotary International and a Paul Harris Fellow, a 32nd degree Mason, both Scottish and York Rites, a member of Broadway United Methodist Church in Indianapolis, and the Belleair Country Club. He served for several years as a Guardian ad Litem in Pinellas and Pasco Counties. He was an avid tennis player and loved to travel. He and his wife traveled extensively throughout the world. He loved his family dearly and was a devoted husband, father, and grandfather. His most treasured trips were those with his family.

To plant trees in memory, please visit our Sympathy Store.
Published by Herald-Whig from Oct. 30 to Nov. 2, 2020.
MEMORIAL EVENTS
No memorial events are currently scheduled.
To offer your sympathy during this difficult time, you can now have memorial trees planted in a National Forest in memory of your loved one.
GUEST BOOK
5 Entries
My deepest sympathy to the Nichols Family for the loss of your loved one, Richard Edwin, and pray God gives you comfort, peace and strength.
JW/JKH
November 6, 2020
Please except my deepest sympathies to you and your family at this time of grieving. May God bless you and your family in this time of sorrow.
Simone Taylor
October 31, 2020
Classmates of Richard. Very sorry to hear this. We had not seen each other for a long time but thought of him often. please give the family our heart felt thoughts
Eddie & Betty Johnson
October 31, 2020
We are very sorry for you loss.
Mary Elaine Gard Leeper
October 30, 2020
To Dear Jo , we were greatly saddened to hear of Dicks passing. Your friendship throughout the years meant do much to us. Please know you are in our hearts snd prayers. Marianne and Don
Don and Marianne Meichenbaum
Friend
October 30, 2020