BORN
1928
DIED
2016
FUNERAL HOME
O'Donnell-Cookson Life Celebration Home
1435 State Street
Quincy, IL
Russell Leon Heindselman, 88, of LaGrange, died Monday evening, Aug. 8, 2016, as the result of an ATV accident at his farm. Mr. Heindselman was born July 9, 1928, in rural Monticello, a son of the late Orville Pierce and Edith Mae Smith Heindselman. He was a 1945 graduate of Monticello High School and attended Culver-Stockton College. On Oct. 30, 1955, he married Phyllis Jeanne Keller, a daughter of Matthew and Dorothy Lucille Keller of Quincy, Ill., at Central Baptist Church in Quincy. After his marriage he then went to work at Gardner-Denver Foundry in LaGrange. During that time he was drafted into the Army during the Korean Conflict. Russell did his basic training at Fort Bliss in Texas and was stationed on the East Coast. After being discharged from service he again returned to work at Gardner-Denver Foundry in LaGrange. Mr. Heindselman retired from Gardner-Denver Foundry in LaGrange in 1990 after 38 years of service. He was a member of the LaGrange Lions Club and a 50-year member and past master of the Canton Masonic Lodge No. 257. Russell was a member and had served as a trustee of the LaGrange First Baptist Church. He also was a member of the Missouri Bluebird Society; and was a prolific writer and poet, writing under the nickname "Missouri Hillbilly Poet." He was devoted to community service, providing various unique items for local benefit auctions. Russell was an avid conservationist, and hunting and fishing with his grandchildren were his passions in life. He was the founder of Valley Place Worm and Fish Farm, and his farm hosted summertime "fish days" where fish for stocking ponds were sold. His farm has been the place local fishermen have purchased bait for many years. In most recent years he enjoyed gardening and was well known for his participation in the Farmer's Market in Quincy. There was never a dull moment in Russell's life as he loved to invent and tinker. He was a regular attendee of the senior dances in the area, was also a Science Fair judge for high school science fair competitions held at Culver-Stockton College, and was a great advocate for outdoor sports and enjoyed teaching youngsters how to build bluebird boxes. Russell enjoyed the fun in fishing and the fulfillment one could find in the beauty of the earth. Survivors include his wife, Phyllis; their children, Gregory Allen Heindselman (Melinda) of LaGrange, Kelly Jeanne Fast (Roger) of Platte City and Matthew Pierce Heindselman (Dayna) of Washington, Mo.; six grandchildren, Kory and Ian Fast (Kelly), Michael and Zachary Heindselman (Greg) and Sheridan and Emma Heindselman (Matt); a step-grandchild, Tylor Kersten (Matt); a great-grandchild, Simon Fast (Kory); a sister, Sue VanMeter (Ronald), of Garland, Texas; and several cousins, nieces and nephews. He was preceded in death by his parents; a brother, Robert; and an infant brother, Joseph. SERVICES: 10 a.m. Saturday, Aug. 13, at Culver-Stockton College's Alexander Campbell auditorium with the Rev. Dean Collings conducting. VISITATION: A gathering of family and friends to celebrate the life of Russell will immediately follow the service at the Caldwell Building in Canton, Mo. The building is two miles west of Canton on Highway 16. MEMORIALS: LaGrange Lions Club, LaGrange First Baptist Church and Missouri Bluebird Society. ARRANGEMENTS: Zehender Robinson Stormer Cookson Funeral Home, Quincy, is handling arrangements. Condolences may be expressed online at whig.com.

Published by Herald-Whig from Aug. 11 to Aug. 13, 2016.
To plant trees in memory, please visit the Sympathy Store.
MEMORIAL EVENTS
Aug
13
Memorial Gathering
Caldwell Building
Canton, MO
Aug
13
Service
10:00a.m.
Culver-Stockton College's Alexander Campbell auditorium
IL
Funeral services provided by:
O'Donnell-Cookson Life Celebration Home
MAKE A DONATION
MEMORIES & CONDOLENCES
Sponsored by O'Donnell-Cookson Life Celebration Home.
15 Entries
Phyllis: I was shocked and deeply saddened to see of Russell's death. I never met him that I remember, but my brother still talks about the wonderful pop corn that he raised and I brought him some on our trip home. He asks me every once in a while if I have any way of getting it again.

I will keep you and your family in prayer at your time of sorrow. He will be deeply missed by all who knew him.

A fellow medical transcriptionist and friend,

Rose Rigdon, Paris, IL
Rose Rigdon
Acquaintance
August 16, 2016
Steve and I met Russ through the Missouri Bluebird Society. Russ was never shy about sharing the knowledge he gained by his many years of birding and was adamant about Bluebird conservation. We always looked forward to the items Russ brought to our annual conference as he was very creative using recycled materials. Russ was quite the character and will be sorely missed.
Steve and Ann Smith
August 13, 2016
I only had the privilege to know Russ for ten years. He was a man dedicated to many projects and it was his dedication to helping Bluebirds where we crossed paths. His passion for Bluebirds was contagious and his energy was unbelievable. He will be missed in the Missouri Bluebird Society but not forgotten. In 2014 it was my honor to award Russ the Bluebird Conservation Award for his years of dedication in helping and promoting Bluebirds. He did not slow down after receiving the award either; both in 2015 and 2016, he handmade multiple items to be auctioned off during our annual fundraiser. Yes Russ will be fondly remembered. Countless people learned from Russ how they too could help Bluebirds.
Steve Garr
Missouri Bluebird Society, President
Steve Garr
August 13, 2016
Condolences to Russ's family. We met Russ at the Bluebird Society gatherings. He was always willing to let you know what he knew, on almost any subject :) He was very passionate on doing the right thing, and we will sorely miss him.
Rest in peace Russ, and we'll meet again someday!
Dave & Anita Hartwig
August 13, 2016 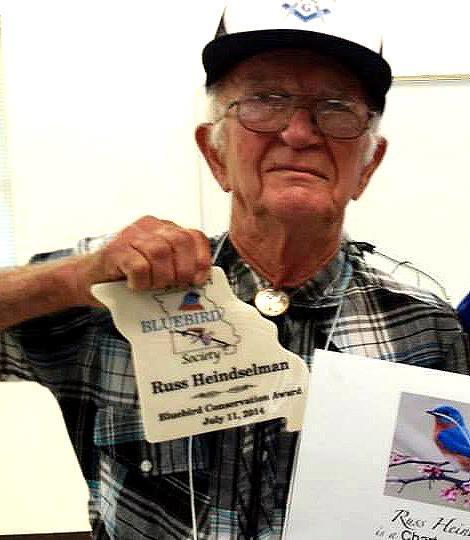 Steve Garr
August 12, 2016
Was so sorry to hear of Russ's accident. He was quite a guy.
Ben Stith
August 12, 2016
As a member of the Missouri Bluebird Society, it has been a delight meeting with Russ at the MOBS Conferences. He was also so generous with is helpful hints and donations to the society. He will be greatly missed. Our condolences to the family. Sincerely, Larry & Mary Dobson
Larry & Mary Dobson
August 12, 2016
Russell was a spit fire of a man that we met 17 years ago when Matt married Dayna. He was always on the go, had things to do and places to go. We remember his popcorn and Russ really remembers the wine. Russell we will miss you. Thoughts and prayers to Phyllis and all the family.
Russ and Meg Kraus
August 12, 2016
Russell was a terrific inspiration to those of us who are getting older. Such joy and excitement in life. We were never bored in Russell's presence. Russell urged and encouraged me to attend the dances. "You'll find some women there to dance with you." And, three times over the years, I worked with Russell, with him as host on his "the most diverse small farm in Missouri", for field days open to the public sponsored by Western Illinois Sustainable Agriculture Society and Tri-State Local Foods Network. Just last week, I bought one of his wasp traps to experiment with, and had resolved to buy one of his bluebird houses, he and I sharing a passion for bluebirds. And fish. I will miss him, and cherish many memories of Russell.
Edwin Waters
August 12, 2016
Rest in peace my Brother!
Tom Dean
August 12, 2016
Mrs. Heindselman Kelly Matt and Greg, Just seen obit. in Keokuk paper tonight. Was in LaGrange July 30. Drove by and thought about stopping one day to visit. Kelly haven't seen you since I moved to Wayland in 9th grade. Always kept up with your Dad in paper. You always had wonderful parents. I always enjoyed going to your trailer. In school at LaGrange we were Cheerleaders. Sending my condolences. Hope You had good life. Until this tragedy. If I can do anything for you all just let me know. Julie
Julie Manton (White or Morgan)
Classmate
August 11, 2016
We are so sorry for your lose. We have missed you so much and to hear of Rusells death made us very sad. We love you Phyilis and we are with you. Let us know if there is anything we can do.
Shelly Hydorn
August 11, 2016
Russell was a really good christian friend. He will be truly missed. He was loved by so many. I enjoyed his laughter, his hospitality and his christian love. He was a true hillbilly. Rest in peace my good friend. I miss you sooo much.
Melissa Shutwell
August 11, 2016
Russell was quite the dancer, whether fast or slow. He attended the Senior dance in Hannibal, Mo at the armory where I met him last fall. He was always joking and having a good time. I remember he was normally the first on the dance floor. If you were a regular or new comer, Russ would gentlemanly ask for a dance. He will be missed by all of us there. Rest in Peace, Russ. My condolences to the family.
Linda Woodhurst
August 11, 2016
I will miss the interesting and informative articles in the Herald-Whig. My condolences, Joyce Job
Joyce Job
August 11, 2016
Showing 1 - 15 of 15 results