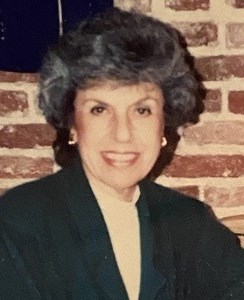 BORN
1923
DIED
2021
Alyce Virginia (Apoyan) Doney Nov. 20, 1923 - Aug. 16, 2021 Alyce Virginia (Apoyan) Doney was born on November 20, 1923, to Misak and Esther Apoyan in Oak Park, Illinois. Raised as the youngest of three girls, Alyce had a magical childhood between growing up in Oak Park and summers spent at Tower Lakes. As Alyce was an excellent student, she was able to skip third grade and free to spend much of her childhood dancing and singing. These passions continued throughout her time at the University of Illinois where she was a part of the Illini Union Department of Dance and University Chorus. She was also President of her sorority, Phi Mu, and a member of both the Spanish and French club. But, most importantly, the University of Illinois is also where she met Henry (Hank) E Doney III. While attending a school dance her junior year, Hank asked her to dance and, before the dance was over, he proclaimed he was going to marry her. During Alyce's senior year of college, her parents retired to Los Angeles. Upon her graduation, she moved across the country to join them and Hank followed. Alyce began working as a buyer at the former star-studded and glamorous Bullocks Wilshire and always noted how much she loved her job there. In 1950, just three years after graduating college, Hank and Alyce were married at the famous Ambassador Hotel. They spent their honeymoon road tripping along the coast of California, ending up at Alisal Ranch where, as Alyce loved to note, she shared a dance with Kirk Douglas. Hank's business career included successes at Burroughs, John P. Chase Mutual Fund, and Western MHP Investments. Along with changes in Hank's careers, came frequent relocations for the family around the country. These new locations included Summit, New Jersey, Birmingham, Michigan, Phoenix, Arizona, and Lake Forest, Illinois. Along the way, their family grew with the addition of their three children, Jeff, Kym, and Todd. In 1972, Alyce and Hank felt the pull back to California, settling in San Marino. On April 1, 1980, Alyce and her friend Jojo opened their shop, Silent Partners, on Union St in Old Town Pasadena. Alyce ran the business for 24 successful years. In addition to running her business, Alyce dedicated her time to different philanthropic endeavors including the Armenian Ararat Home. Over her life, Alyce enjoyed avidly playing tennis, playing bridge with her friends, and finding any excuse for a visit or a party with loved ones. Constantly searching for her next adventure, Alyce was always on the lookout for her next travel destination. Alyce traveled well into her early 90s, eventually stepping foot on every continent. Her greatest joy was spending time with her seven grandchildren who spent countless weekends playing in their pool at the house in San Marino. They learned to cook traditional Armenian foods from their grandma. Alyce enjoyed a reputation of being a fabulous cook. Alyce will always be remembered as a vibrantly vivacious soul who lived her life to the fullest and who treasured her family above everything. She will be greatly missed by all who knew and loved her. Alyce is survived by her three children, Jeff, Kym and Todd, her Daughter-in-Law Michele, her seven grandchildren, and two great-grandchildren. The Doney family will be hosting a Celebration of Life on what would have been her 98th Birthday (November 20, 2021) It will be held at Annandale Country Club starting at 4:00 PM for all who would like to join in honoring Alyce Doney and celebrating her outstanding life.