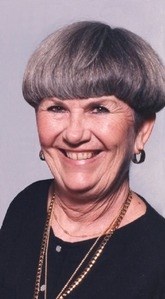 BORN
1933
DIED
2021
FUNERAL HOME
Douglass & Zook Funeral and Cremation Services
600 E. Foothill Blvd.
Monrovia, CA
Aug. 29, 1933 - Oct. 5, 2021 A beautiful lady has left this world for a better place. Long-time Monrovian Shari Fent Pollard died October 5, 2021 in Arcadia, CA. She had been bravely battling cancer since August 2020. Shari was born in Council Bluffs, Iowa on August 29, 1933 to Gordon and Helen (Breedlove) Fent. The family moved to Southern California during WWII where her father was part of a Kiewit Corporation construction team at March Air Force Base. Shari had attended 14 different schools honing her people skills as her father moved from each job site before attending Monrovia-Arcadia-Duarte (MAD) High School and graduating in 1951. She went on to Pasadena CC (song leader and PAM sorority) and Cal Poly Pomona. She was married in 1955 to former MAD classmate David Knutson until he passed in 1968. They had two children, David Scott and Amy Louise. She then married former MAD classmate Charles (Chuck) Pollard in 1969. Three children came along with Charles Robert, Michael, and Denise. Shari was now an amazing and loving mother to five as they participated in Little League (MYBL), soccer (AYSO), ballet, etc. As a young family they traveled, camped, water skied, rode dirt bikes, and more. Later, Shari very much enjoyed working for 10 years as the Children's Librarian at Duarte's Royal Oaks School. Her community activities included memberships in the Monrovia Guild of CHLA (Past President), PEO Chapter EC (Historian), Monrovia League, Monrovia Tennis Club, and Monrovia Dance Club (Past President). Also, she had been a long-time member of St. Luke's Episcopal Church. She was an avid bridge and canasta player, tennis player, golfer, and USC fan. After both she and Chuck retired, they traveled extensively across the US and Canada in their motor home. They also took trips to Hawaii, the British Isles, the Danube River, the Baltic Sea, and other European destinations. Attending jazz concerts at Mammoth Lakes and Pismo Beach, and enjoying their Cathedral City winter residence, were also some of Shari's favorites. Shari will be remembered as an energetic and loving wife, mother, grandmother, and friend. She made friends wherever she went and could and would engage in conversation with anyone along the way. Shari loved children and was affectionately known as "Beepsie" by her grandchildren. She is survived by sister Jayne Henke of Selma, CA; loving husband Charles of Monrovia, CA; daughter Amy Whoolery (Dan) of Arcadia, CA; daughter Denise Walton (Ron) of Glendora, CA; son Robert Pollard (Janie) of Whitesboro, TX; and daughter-in-law Colleen Pollard of Sisters, OR. She was predeceased by son David Scott Knutson (1977), and son Michael Steven Pollard (2012). Shari is also survived and immensely loved by her seven grandchildren and three great-grandchildren. A funeral service will be held at St. Luke's Episcopal Church located at 122 S. California, Monrovia, CA on October 22, 2021 at 12:30 pm. Donations in lieu of flowers would be welcomed by the City of Hope, 1500 E. Duarte Road, Duarte, CA.

Published by Whittier Daily News on Oct. 15, 2021.
To plant trees in memory, please visit the Sympathy Store.
MEMORIAL EVENTS
Oct
22
Funeral service
12:30p.m.
St. Luke's Episcopal Church
122 S. California, Monrovia, CA
Funeral services provided by:
Douglass & Zook Funeral and Cremation Services
MAKE A DONATION
MEMORIES & CONDOLENCES
Sponsored by Whittier Daily News.
2 Entries
Shari, What a wonderful lady, when she and Chuck got married she stepped into the lives of four people, Chuck ,Bob, Mike & Denise, & brought her beautiful children with her. what a lady she was, she took care of all 5 kids like you won't believe, I grew up with them playing football in there backyard and was a with them daily. although I moved in the mid 70's I still thought about the family and missed them in my life. RIP Shari you were a sensational lady, Bob Price, Colorado
Bob Price
October 27, 2021
Rest In Peace Shari! We will never forget your tradition of wonderful Christmas morning breakfasts! We love you and miss you lots!
Roger and Liz
Family
October 21, 2021
Showing 1 - 2 of 2 results